TRENTON – Gov. Chris Christie pounced on the legislature today for leaving his toolkit behind while taking on less important issues – a reiteration of his message at each of his 14 town hall meetings.

They passed S1643, which deals with sterilization of cats and dogs, and S2215 – “One of my favorites,” Christie said – which requires notification from a dentist when dentures were manufactured outside of the United States.

In other words, not exactly the issues constituents are hollering about, the governor said.

“People call me impatient, and I guess in some ways I am,” Christie said. “But 197 days since we put these proposals forward (and) they rushed to all of you so they can beat my press conference by an hour.”

Christie said the Democratic leadership, who held a press conference announcing an arbitration reform bill at 1:30, never reached out to him to work on the compromise bill.

Democratic staffers disproved that assertion after the press conference ended with texts sent to the Governor’s Office yesterday and today.

Still, Christie was doubtful that what he called the “spine of the tool kit” would get done: reforms to arbitration, civil service, unfunded mandates, and the Council on Affordable Housing (COAH).

An agreement on a COAH bill was reached months ago, but the bill that exists today, Christie said, “will never be posted in the Senate (and) will never be signed by a governor. Not this one.”

He called out a quote from Assembly Speaker Sheila Oliver (D-East Orange) claiming “extensive effort” over the summer to analyze reforms and create a plan.

But he said, even after a press conference three weeks ago on arbitration reform, “the plan couldn’t even get out of her caucus,” Christie said.

He carried on his tirade against the last-gasp efforts by the Democrats to codify his reforms, or something resembling them.

After 20 committee hearings and 42 hours spent discussing bills, only 90 min have been spent on the toolkit since Christie plopped it on a podium over five months ago, he said.

The Dems’ presser today – “Without any copy of any piece of legislation,” Christie noted – was nothing but a side show.

“You don’t negotiate through press release,” he said. “I will not give (taxpayers) fake reform…They have 28 days to get serious.”

Based on the reported arbitration bill’s intent, Christie called it nothing but “bullet-pointed platitudes.”

“(It’s) full of holes…that will allow the special interests to get over on you taxpayers,” the governor said. “I will veto watered down relief.”

Christie backs the bill proposed by state Sen. Mike Doherty (R-Washington Twp.), which has a hard 2 percent cap on arbitration awards, but also includes health care costs in the cap. The Democrats’ version does not.

Doherty’s bill also does not expire after three years, a “sunset clause” the Democrats have included. 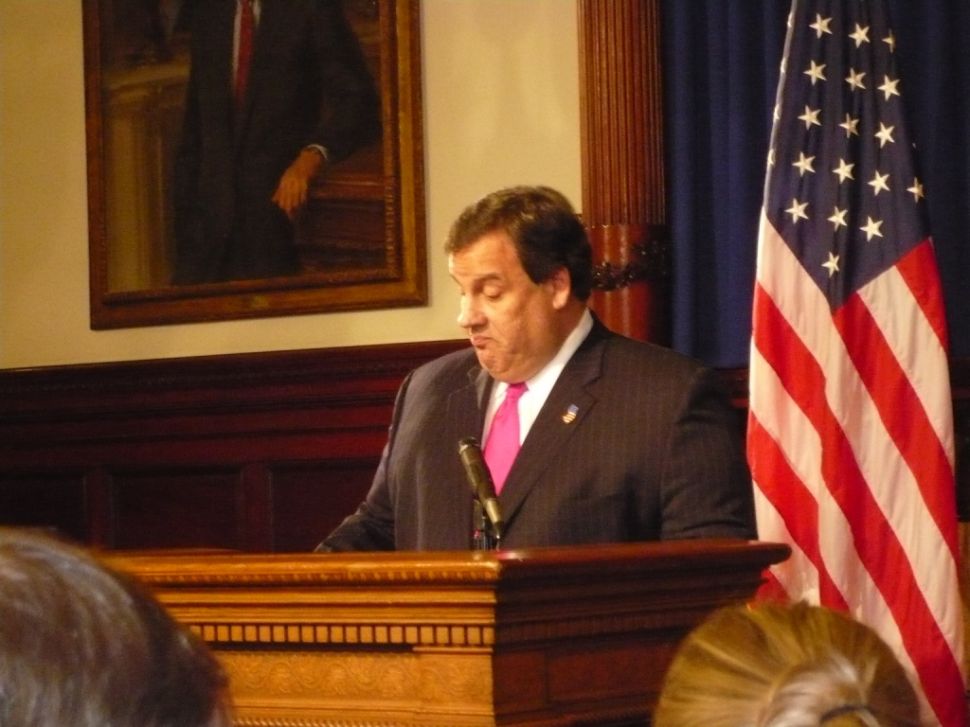