Gov. Chris Christie sat for an editorial board interview today at the Courier-Post today, aired live at CourierPostonline.com. Asked of the prospects of his municipal toolkit items, Christie didn’t get into specifics, but said he’s already put the legislature in a corner.

“I think that the legislature has no choice but to pass it,” Christie told the board. If they don’t, “(I)t will lead to is extraordinary layoffs at the municipal level.”

He said Democratic and Republican mayors were “buttonholing” state Sen. Pres. Steve Sweeney (D-West Deptford) and House Speaker Sheila Oliver (D-East Orange) all last week at the League of Municipalities for the bills.

Once they passed the cap, Christie said, they knew they needed the toolkit. The governor told them so.

“All these things have to be done in sequence,” he said. “Just what we’ve gotten done already is miraculous.”

Could some bills trump others?

“I negotiate with Steve Sweeney, Sheila Oliver, Tom Kean and Alex DeCroce, with all due respect. I’m not going to negotiate here,” he said. “There’s no silver bullet. It’s a group of things.”

He said he’ll announce his replacement for fired Education Commissioner Bret Schundler before the end of the year.

He said former Washington D.C. schools chancellor Michelle Rhee is not a candidate, “but she’s helping me with the search,” he said.

He said the school superintendents’ salary cap resonates at his town hall meetings, and admitted missing the contract extension in Medham Twp. that flew under the state’s radar.

“I’m unhappy that our own hometown got by us,” he said. “We missed it.”

He called out Chatham Superintendent Jim O’Neill: “This guy thinks he’s like this dispassionate commentator on the issue. He’s making over $200,000 a year and is looking for a contract extension for himself.”

“The only (people) that called me on ARC were the mayor on New York, the governor of New York, and New York City developers,” he said. “No one in New Jersey cared.”

“It’s all about Frank Lautenberg,” the governor said, mocking the senator. “This is the one I got the 3 billion for; it has to be this idea.”

He backed off any talk of a gas tax hike as a means to fill the Transportation Trust Fund coffers. But he hasn’t taken it off the table.

“Nothing has been put on the table,” he said. “Let’s not make big headlines that a gas tax hike is on the table.” He is “heavily disinclined” to raise any tax.

Asked specifically about farmland tax incentives that may be abused, as was an issue in U.S. Rep.-elect Jon Runyan’s campaign against outgoing U.S. Rep. John Adler (D-Cherry Hill), Christie balked.

“There’s a lot of fake farmers out there,” a reporter asked.

“I haven’t thought about it,” he said.

“Would you consider making any reforms to the income requirement then?”

We’ll get back to you, Christie said.

They asked about further reforms at the Delaware River Port Authority, but Christie said he’s doing his best.

His next appointment at the DRPA isn’t until 2014.

“Senator Sweeney made sure that all of those folks were reappointed in ‘09 for five year terms,” he said. “They were put there for a reason and they’re executing that reason.”

He reiterated his opposition to extending gambling, but put a 4-5 year time frame on the lookback.

“New Jersey’s only taken money out of Atlantic City,” he said, and it deserves an investment strategy, which is on the legislative agenda.

Casino owners are willing to stake $50 million per year on cleanup and marketing, he said.

But the horse racing industry, reeling from the loss of millions in state subsidy, aren’t reacting the same way.

He said he’s willing to entertain state Sen. Ray Lesniak’s (D-Elizabeth) online gambling bill as part of a bigger plan that includes some of the Hanson Report recommendations.

Locally, he said Camden – just named the second most dangerous city in America and facing massive police layoffs – can expect a slice of the transitional aid pie distributed by the Department of Community Affairs today.

Transitional aid was formerly called special or extraordinary aid, but Christie said it was given out every year, making it “neither special nor extraordinary.”

Now, municipal aid will be at least partially contingent upon reforms dictated by the state.

He said he’ll be spending Thanksgiving at Drumthwacket with 60 people from both sides of his family.

“Here are my jobs: I’ve got to carve the turkeys, I’ve got to make the mash potatoes,” he said. “She’s got me tasked.”

The First Lady won’t tolerate excuses: “Don’t tell me some state emergency has come up.”

Christie said he’s got a peel-cut-boil-drain-mash technique that will surely have his dad pleased. But he’ll be the toughest critic.

“I do not tolerate lumps in my potatoes,” he said, and the rest of the family will be watching. “Now they’re looking for ways to take shots.” 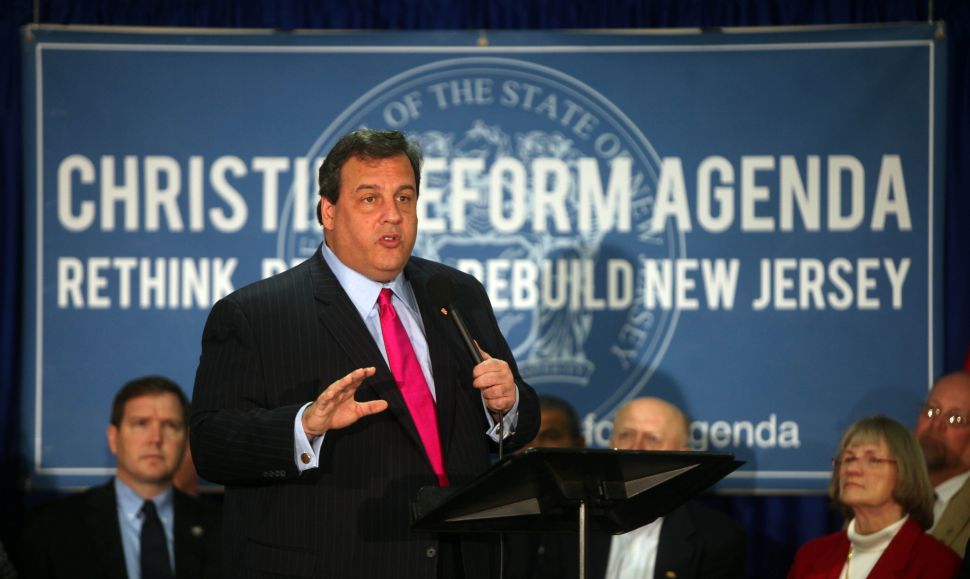