The Book of Daniel, The Bible

The passages describing the rule of Nebuchadnezzar II come to mind. The controversial ruler attempted to expand the Babylonian footprint into Syriah and Judah.

The little known play by the celebrated author of Dr. Faustus considers the life of the failed king of England, a character who later appeared in Mel Gibson’s Braveheart.

The Fall of the Roman Empire by Edward Gibbon

See in particular the passages related to the Emperor Commodus, son of Marcus Aurelius, another controversial ancient figure, infamous in certain circles, yet vividly brought to life in the Russell crowe classic, Gladiator.

Porky’s the screenplay by Bob Clark

True, Animal House was a college environment (Dartmouth, was it?) that probably more closely approximated the Yale of Bush’s high-spirited youth. But Bush devotees would argue the high school setting of Porky’s is a natural intellectual duplicate for the GOP leader.

Not a highly regarded president, the seldom read documents from his presidency are on file at the Library of Congress.

Bush left two wars and a recession to his successor but is credited – at last to date – with no verbal imprint upon history in his parting exchange with President-elect Barack Obama. A failed Buchanan, at least, left Abe Lincoln with the following, “If you are as happy in entering the White House as I shall feel on returning to Wheatland, you are a happy man indeed.”

Catcher in the Wry by Bob Uecker

Yes, yes, we know. Bush is not only a Texas Rangers fan, but a former owner, yet Uecker’s homespun take on life in the majors (He played with the Brewers and the Braves) offers a frank and funny look at life in the Big Leagues and might just be the perfect coffee table accompaniment to a book written by a man who boasted of having just read “two Shakespeares.”

Last Will and Testament by Benjamin Franklin

No, that isn’t a typo, we did include the intellectually curious Franklin on this list, but not because of any immediate correlation with Bush. Franklin’s son, William “Billy” Franklin – the Bush tie-in, and for you New Jersey history buffs, a discredited royal governor of New Jersey – figures in his father’s last will and testament, if only in a paragraph and not affectionately – but one of a long line of “sons of,” a role W. proudly fulfilled on the heels of George Herbery Walker.

That grainy, black and white March 31, 1968 broadcast of Lyndon Johnson

Maybe it’s depressing to consider now the prospect of what might have been in 2004 had Bush pulled a Lyndon and declared, “I shall not seek, and I will not accept the nomination of my party for another term as your president,” but the television document might give a no BS gutcheck to the 497-page Decision Points. 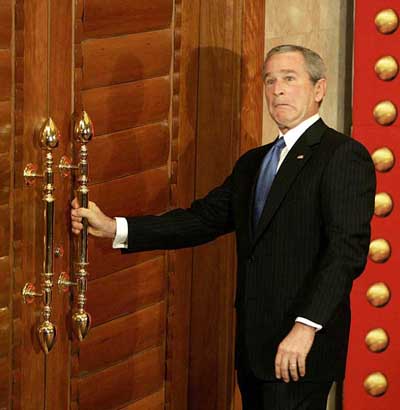