ATLANTIC CITY – Democrats were already worried about Essex County Executive Joe DiVincenzo’s cozy relations with GOP Gov. Chris Christie, and that was before they heard this week that DiVincenzo will allow Christie to do the honors at the county exec’s swearing-in ceremony.

Sitting in the Metropolitan Cafe in the Borgata on Friday morning on the last day of the annual League of Municipalities, DiVincenzo unapologetically dug in, defending a man he has known since 2000, who he characterizes as New Jersey’s strongest governor in the county executive’s lifetime.

“Maybe it’s a function of the fact that he was born in Newark and grew up in Essex County, but he has been very good to us,” DiVincenzo told PolitickerNJ.com. “He won 27% of the vote in Essex and look what we got back. I hear it from the Democrats, I know, and he hears it from Republicans. Believe me, there are Republicans who were upset that their towns’ funding was cut and Essex did alright relatively, I heard from them down here just yesterday. There was a Republican county executive when (Christie Todd) Whitman was governor. Guess how much money Essex got from Whitman? Zip.”

After getting his budget cut by $22.1 million, DiVincenzo negotiated $16.8 million in state aid restorations: $15 million for a drug rehabilitation program and $1.8 million for a pilot program at the prosecutor’s office. In addition, the governor helped the county executive secure $7.7 million from the Port Authority of New York and New Jersey to purchase land for park development.

Yet now most of the quiet hand wringing concerning DiVincenzo comes from Democrats worried not only about Essex County’s performance in 2012 when Christie archenemy U.S. Sen. Bob Menendez (D-Hoboken) runs for re-election, but over the strong executive’s influence over key legislators who work for Essex County, including Speaker Sheila Oliver (D-East Orange).

“We’re talking about two different things – politics and government,” DiVincenzo said. “I support governmentally what the governor is doing, and have no problem saying so. In terms of both style – well, come on, he has his own style – but substantively, he is doing at the state level much of what we have done at the county level. I wish some of these legislators were executives or mayors so they understood the crisis we face.

“But politically, I’m a Democrat. It’s critical for us to retain a legislative majority. We want Sheila (Oliver) to be the speaker. We don’t want to give that up. Are you kidding me?”

As Menendez prepares to give up his job as chairman of the Democratic Senatorial Campaign Committee in part so he can focus less on Colorado, Nevada and Kentucky and more on a politically deflated Bergen, Hudson and Middlesex, the senator’s first pre-Thanksgiving power session next week will be with DiVincenzo, where he specifically wants to make sure Essex will be appropriately muscled up.

“2012 is going to be about Obama,” said DiVincenzo chief of staff Phil Alagia, who sat beside his boss at the edge of the casino.

“And he’s going to be fine,” DiVincenzo pointed out, referring to the president, and, by extension, Menendez, convinced that national Republicans will implode and Obama and Democrats will benefit, aided by big urn turnout in places like Essex.

But what about the perception at the state level that DiVincenzo wields too much power over Oliver, given the fact that as county executive, he’s her professional boss?

“Look, both Sheila and Teresa (state senator M. Teresa Ruiz, DiVincenzo’s chief of staff) were county employees before I became county executive, but I’m of the opinion that legislators should serve fulltime, so you eliminate any perceptions of a conflict of interest,” he said. “Do I think they should advance that legislation now? Yes, I do. Tough in this economy? Okay. So, what about the leaders? I think the senate president and speaker should be fulltime positions.”

DiVincenzo huddled up with Sweeney last night and described their political relations as “great.”

As for his future political aspirations, the county executive said he definitely intends to run for re-election, but didn’t rule out a gubernatorial run at some point – after Christie’s gone. 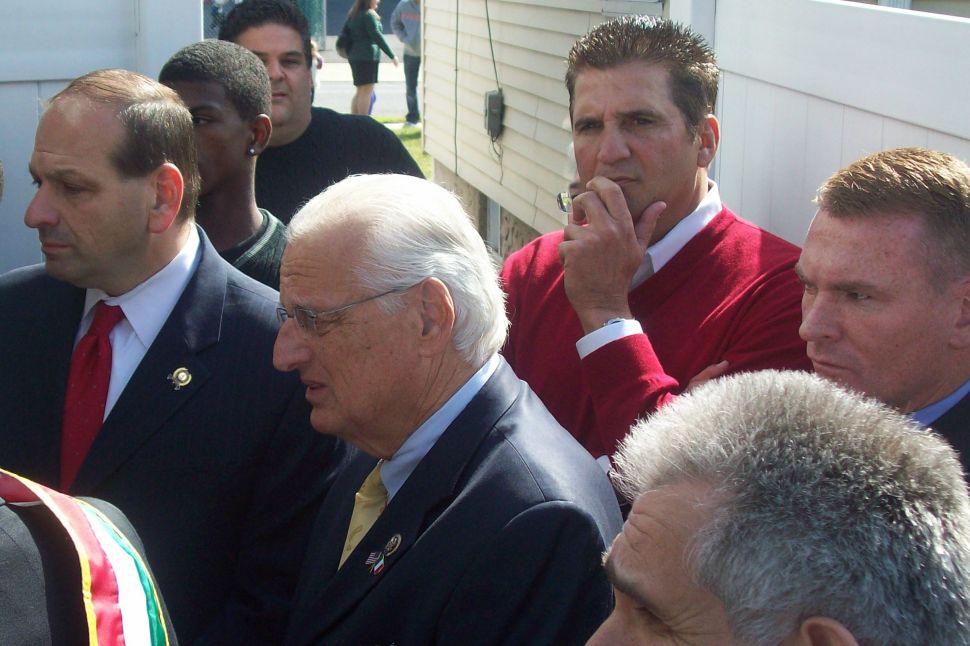