ATLANTIC CITY – Rattled by Gov. Chris Christie and the challenges of the economy, Democrats took solace Wednesday night in the promise of three up and comers and the solitary presence of a veteran urban leader.

Insiders armed with drinks offered two interpretations of Bollwage’s assumption of the glamour party spot at the League of Municipalities this year.

“It’s the kick-off to Bollwage for governor,” offered Jeff Tittel, executive director of the New Jersey Chapter of the Sierra Club.

Then there was the slightly more subdued read.

“He’s flexing his muscles,” said an Essex operative, speaking on condition of anonymity. “He’s the Brian P. Stack of Union County: the guy who adapts the times and gets elected as a white male despite being in the minority. He’s a confident veteran and doesn’t mind showing it.”

A nearly 20-year government fixture on the mayor’s chair, Bollwage has been one of state government’s most persistent critics, twittering disregard for policies championed by both Christie and the Democratic Majority in the legislature. While Newark Mayor Cory Booker and Essex County Executive Joe DiVincenzo stood with the governor on the two percent municipal spending cap, Bollwage gattled out a lament of Christie’s $5 million state aid cut to Elizabeth, and railed against routed members of his own party.

“What do you think, honey?” he asked his wife last night when PolitickerNJ.com asked the mayor if he would be interested in opposing Christie for governor in 2013.

He mostly laughed off the question in between hand shakes as his guests feasted on a buffet of deep dishes and piled-high meat plates.

Two hours later, Jersey City Councilman Steve Fulop, Newark Councilman Anibal Ramos and Roselle Council President Jamel Holley welcomed guests to the Chelsea, just doors down from Trump on the boardwalk, where the three comers regaled a crowd packed into a long, slender room anchored by a hyper-active bar on one side and a wriggling dance floor on the other.

“It’s been a rough year in politics, and our event gave people an opportunity to have fun,” Holley told PolitickerNJ.com. “We reenergize the party give people something to get excited about.”

Fulop last month announced his plans to create an exploratory committee for mayor. Holley launched his successful re-election bid earlier this year with a drum roll build-up supplied by state Sen. Ray Lesniak (D-Elizabeth), who called the council president a future sure shot for mayor.

Roselle Mayor Garrett Smith is up next year.

Then there’s Ramos, who easily won re-election in May then found himself the taxpayer scourge of Newark along with the mayor and the rest of the governing body as they reluctantly green-lighted a 16% tax increase.

But as 29th District state Sen. M. Teresa Ruiz (D-Newark) weathers a first term complicated by DiVincenzo’s close ties to the governor and her husband’s legal troubles concerning his collection of absentee ballots in Ruiz’s 2007 senate campaign, Ramos also generates buzz in a roomful of politicos as a potential replacement next year.

“Right now, we have so many issues in the city, that while some people are looking at other opportunities, we have to bunker down and focus on what’s in front of us,” said Ramos.

“It is a very tough situation for everyone in the ward and the city right now. Could certain things have been done differently? Yes.”

A DiVencenzo acolyte and county supervisor, he praised the governor for tackling the state’s budget crisis.

“To his credit he’s taken on some state challenges, which are the same financial challenges we face in Newark,” Ramos said. “Right now, everyone is waiting on the toolkit.”

There was worry in the room about DiVincenzo – the towering party figure in Essex County – so determinedly backing Christie, and several head shakes of disbelief as news circulated that the GOP guv is scheduled to swear DiVinzenco in for a third term.

One operative speaking on condition of anonymity said DiVincenzo – like the equally disposed Christie champion Stack in Union City – simply nurses a close relationship with Christie for the good of Essex County.

“The governor has the money,” said the operative. “For Essex, Joe would cozy up to Jack the Ripper if he had to.”

Unwilling – at least to date – to enter a Christie comfort zone, Bollwage enjoyed ballroom-sized party goodwill, as the three comers – Fulop, Holley, Ramos – happily worked their Chelsea crowd, for the moment building toward, not yet wielding, urban executive power. 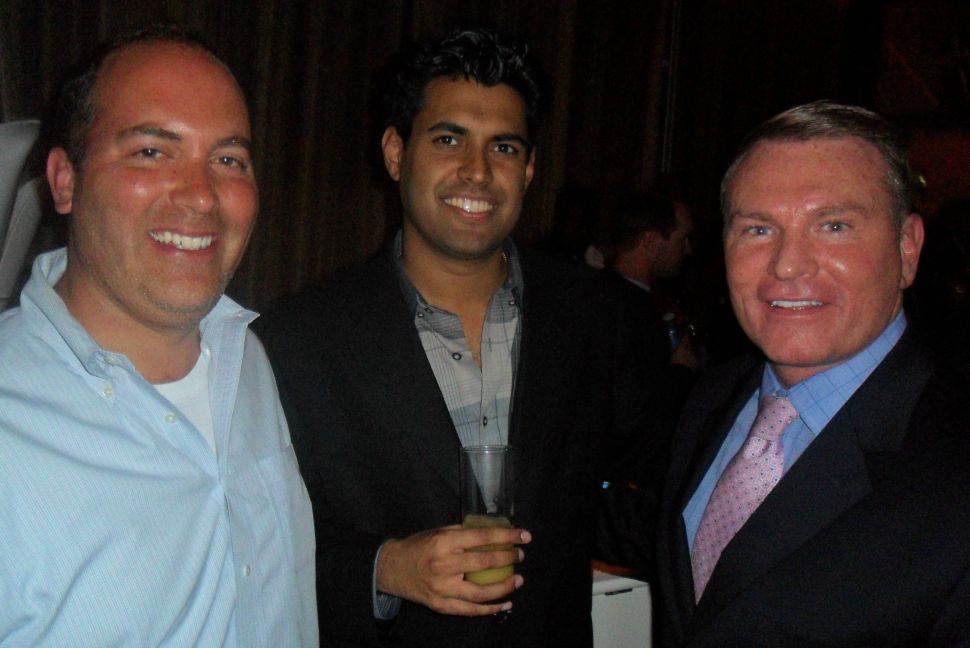