A majority of New Jerseyans like their governor and want to keep him in Trenton, not graduate him to Washington, according to a Quinnipiac University Poll released this morning.

Gov. Chris Christie has a 51-38% approval rating, according to the poll, which is higher than President Barack Obama’s 46-50% mark with New Jersey voters. But 61-24%, and 45-36% among Republicans say Christie would not make a good president. Moreover, 60-21% of voters believe Christie will not run for president in 2012.

Pollsters tried to gauge whether Christie is more leader than bully, and 50% of voters said he is, while 42% said bully first, leader afterwards. Forty-eight percent of those polled said Christie is “confrontational,” while 43% were content to describe him as “honest and refreshing.”

“We like our in-your-face governor, Christopher Christie, and think he’s a real Jersey guy – sometimes a bully, often confrontational, but getting a fair number of A’s and a lot of B’s in his first year,” said Maurice Carroll, director of the Quinnipiac University Polling Institute.

“But all that Christie-for-President chatter in the national news media? New Jerseyans think it’s more political gossip than a serious possibility. Only one in five think he might run and most doubt that he’s ready for the White House.” 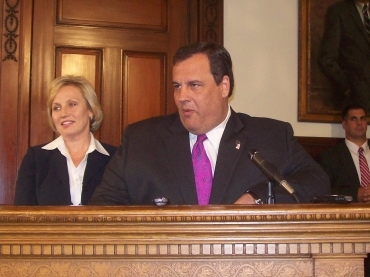