Newark Councilman Ron Rice Jr. is taking critique of the governor to a new level.

Rice left this note on his Facebook page: “Is our Governor on crack? No seriously, is he smoking or drinking something that is illegal or at least detrimental to one’s health? He goes on Oprah and touts the 100 million Zuckerberg gift and now argues that it should be used to make up for HIS Abbott dollars cuts to the Newark school district? Chris Christie is insane!!!!”

The West Ward Dem and loyalist of Newark Mayor Cory Booker is not buddying up to Gov. Chris Christie the way Booker is.

“Obviously, I’m joking,” Rice said of the crack comment. “That’s always the running joke that we use (in Newark),” when someone pulls a nonsensical move.

Rice’s concern comes from a NJ Spotlight article detailing the Christie administration’s $1.1 billion in school aid cuts for urban Abbott districts, a move that is awaiting a court decision.

Newark schools have been under state control since 1995, and the city is part of the legal battle against Christie over the loss of Abbott money.

In the article, Michelle Miller, senior deputy attorney general, said Newark is actually facing one of the smallest percentage cuts of state aid next year.

In a court briefing, the state also “alluded to the well-publicized $100 million gift to the Newark public schools from Facebook founder Mark Zuckerberg, although that money is not earmarked toward operational funds or even necessarily the district itself,” according to journalist John Mooney, an education beat specialist.

Rice said, “The point I’m making is I don’t get his mindset. The implications (of substituting Zuckerberg money for Abbott money) are very serious.”

Christie’s spokesman Michael Drewniak didn’t comment on the Abbott gap-filler situation, but said, “This is so over the top from a sitting councilman that he denigrates his office and himself personally.

“There’s no sense in dignifying it further,” Drewniak said in an email. “It’s Rice who needs to explain himself and his stupid remarks.”

Willing to dish it on either side of the aisle and generally viewed as the frontrunner to succeed U.S. Rep. Donald Payne (D-Newark), Rice last year tweeted a call-out to state Sen. Pres. Steve Sweeney (D-West Deptford) when the Democrats were backing away from a vote on marriage equality.

Rice said he caught flack for the comment, but doesn’t regret it.

“I was right,” he said today. “(In the end,) he did post it and voted against it. And he came back and said, I should have voted for it.”

The fiery verbal outbursts are a mechanism to be heard, Rice said.

“The reality is, in a lot of ways that’s all we have in our ability to fight,” Rice said.

He intends to begin organizing a real response to Christie’s regime in 2011, centered on local officials who are opposed to the deep-cut actions of the governor.

“We ought to be proposing real changes,” he said.

Newark is facing layoffs for nearly 170 cops, which Rice said is a direct effect of $60 million in state funding cuts.

“There’s tightening our belts, and there’s draconian measures,” he said, pinning Christie as champion of the latter. “All I’ve been hearing is horror stories,” from mayors of all political persuasions, he said. 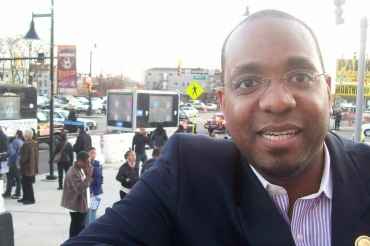