He will soon be stepping down from his position in District 36, home to state Sen. Paul Sarlo (D-Wood-Ridge) and Assemblyman Gary Schaer (D-Passaic), according to numerous sources close to his district.

A new private sector job is on the horizon for Scalera, although it has not yet been finalized.

Scalera is a retired deputy fire chief of Nutley and came to the legislature in 2003, filling the unexpired term of Sarlo when he moved to the state senate.

He declined offers to comment on the story, but some sources think there are other motives for his stepping down.

District 36 sits at the base of Bergen County and reaches slightly into both Passaic and Essex counties, encompassing the towns of Passaic and Nutley, respectively.

The Democratic redistricting team, which Sarlo has one of five seats on, will aim to carve Nutley out of the 36th, sources said, potentially leaving it to merge into the 28th or 34th districts in Essex.

Chris Eilert, chief of staff for Sarlo, said redistricting team members have signed confidentiality agreements and even if they hadn’t, it would be too early to tell what the new districts will look like without updated census data.

“Senator Sarlo is very satisfied with his existing legislative district,” Eilert said. “He’s looking forward to running for reelection with Gary Schaer and Fred Scalera on his ticket.”

Cutting Nutley out of his district can save Sarlo from DiGaetano – unless the former Republican assemblyman moves into the redesigned district – but are there other opponents in 2011 for Sarlo?

Several Bergen Democrats said Sarlo will also see competition in the primary next year, most likely out of Lyndhurst.

When former party boss Joe Ferriero was indicted Sarlo ran from the fray, sources said, and the memory in Bergen is still fresh.

“Senator Sarlo makes no apology for publicly stating that the indicted chairman should have resigned,” Eilert said. “If there are still elements in the Democratic party who want to support a regime that was convicted of corruption, then he welcomes that debate and looks forward to confronting them.”

Sarlo also takes some blame for the devastating GOP sweep this year, and his vote rallying ability was shown to be weak as his brother only eeked out a council seat in Little Ferry that should have been no contest. 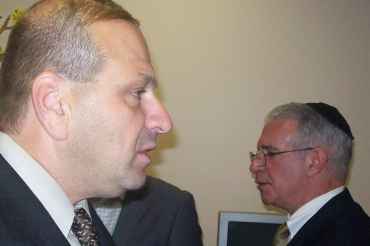