TRENTON – The state Senate told Gov. Chris Christie to try again on the medical marijuana overhaul he attempted to impose, or face a reverse veto.

A concurrent resolution out of committee today accuses the Department of Health and Senior Services of violating the intent of the medical marijuana law through its implementation and recommends several areas of conflict that need to be addressed.

The law, passed and signed last year by Gov. Jon Corzine, proposed having six dispensaries and accompanying growing facilities throughout the state for patients afflicted with a large swath of debilitating diseases and terminal illnesses.

But the state changed the rollout to include only two grow centers and four dispensaries and to restrict distribution for some of the approved afflictions.

Also, the state has determined that the marijuana should have limited potency, requiring all plants that exceed a 10 percent limit on THC, the active ingredient in marijuana, to be destroyed.

Many insiders believe Christie is using the prohibitive rules to remove the teeth of the bill.

“Of all the states who have medical marijuana, this is the most restrictive law already,” said State Sen. Jim Whelan (D-Atlantic City), a supporter of the original bill. “This is not California: ‘Oh, I have a headache,’ and they say go get some pot.”

When the concurrent resolution is passed in full and delivered to the administration, it starts a 30-day clock ticking for the Department of Health and Senior Services to amend or withdraw the proposed rules and regulations, or face invalidation of the law – in part or wholly – by another concurrent resolution passed by the legislature.

Carrying Christie’s water, state Sen. Sean T. Kean (R-Wall) opposed the resolution, even though he voted in favor of the original bill and still supports it.

“We do have an executive branch that proposes the regulations,” Kean said, and the resolution “circumvent(s) that executive prerogative.”

State Sen. Ronald L. Rice (D-Newark), who did not support the bill, is supporting the resolution.

“I understand the process,” he told Kean. “I know it well, but I also understand the legislative intent … I will not subordinate myself to (the administration).”

The committee approved the resolution, with Kean alone in opposition. [Correction appended.]

Under the administration’s rules and regulations, dispensaries have been separated distinctly from growing centers and the number of each has been reduced.

The state has ruled that only four dispensaries be authorized statewide, rather than two in each the north, central, and south portions of the state according to the law.

Scutari said the law was designed for patient convenience and, although he credited the administration with their proposal to use a additional cost delivery service, he said still circumvents the intent of the law.

The state’s regulations also prohibit dispensing medical marijuana within drug-free school zones and would require users within the zones to file for a waiver to have it delivered.

Advocates for medical marijuana told the committee that the regulation would present an unfair disadvantage for urban patients who live in densely-populated that include school zones.

The state is requiring patients requesting medical marijuana to prove that conventional medical treatments were ineffective, regardless of what debilitating condition they have.

The law only requires such proof for seizure disorders, intractable muscle spasticity, and glaucoma. For other conditions, like cancer, HIV, and AIDS, patients would only need to prove that the have the debilitating condition under the existing law, not that they didn’t responded to conventional treatment.

The resolution also asks that the 10-percent THC restriction be adjusted or removed because it restricts growers and implements a restriction that no other state with a medical marijuana program has put in place. The reduced THC levels are hard to maintain in growth of the marijuana and do not provide adequate pain and suffering relief to patients, according to medical marijuana advocates.

“That is essentially making patients smoke garbage,” Scutari said before the committee. Allow doctors to decide what the potency should be, he said, as well as what strain would best help their patient.

The administration has restricted growing to only three strains of marijuana, which Scutari said will leave some patients without the best strain for their particular condition.

A woman from Egg Harbor Twp. suffering from ALS, or Lou Gehrig’s disease, told the committee that she felt lifeless on morphine and other drugs, unable to communicate with family.

“When I smoke marijuana,” she said in an emotional testimony, “I can express myself and I can be the person that I want.” 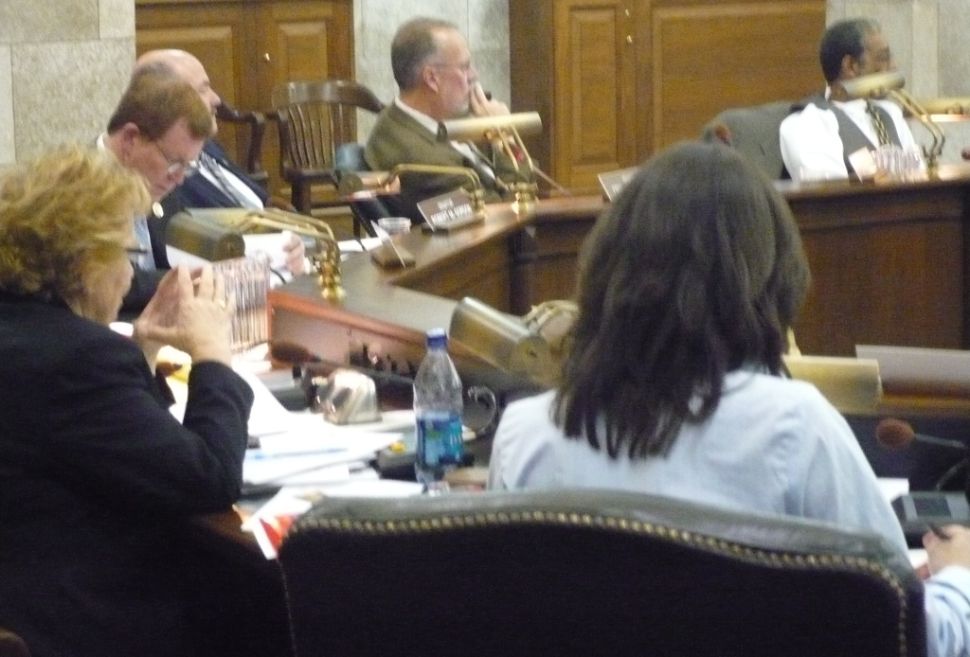