UNION CITY – Thanksgiving volunteer crews under the direction of Mayor Brian P. Stack on Saturday began delivering 15,000 turkeys to residents of Union City and other towns in the 33rd Legislative District, an annual holiday service that Stack and his political allies have fulfilled for 25 years.

“There are a lot of poor families in the city and we want them to have a turkey on Thanksgiving Day,” said Stack as he walked rapidly through the streets of his North Hudson County city, following up on a letter he issued to residents alerting them to the turkey drive and asking them to call the mayor’s civic association with all requests.

“This is the time of year to be joyful, but most of all, we should be thankful for what we have – for families, for friends, for good neighbors and our country,” the mayor wrote. “It is also a time to share. If you or someone you know needs a turkey for Thanksgiving, please call me. … Please ask for a turkey only if you need it, as supplies are limited. In a city as large as Union City, we have many needy families who would not have a Thanksgiving turkey if we didn’t provide one for them.”

The big trucks from a Pennsylvania turkey farm arrived in the pre-dawn hours at the enormous old port authority transit hanger turned city DPW fortress on New York Avenue. Forklifts transferred the cargo to the hanger and to rented trucks as volunteers arrived in the form of city workers, residents and ROTC troops in camo and work gloves.

Stack mobilized his allies to tenement buildings where they offloaded turkeys by the boxload, created a staging area in the courtyard or sidewalk, and then, on a signal from Stack -went floor by floor, door to door to the targeted apartments. Heads appeared in windows high above the street and people exchanged happy greetings. The crews kept moving, the trucks and workers synchronized from one block to the next with the mayor always on foot.

The laundry hung between buildings on the long stairway up to the top of one tenement.

“Happy Thanksgiving,” said Commissioner Chris Irizarry when he handed a turkey to a resident. A close ally of the mayor’s, Irizarry has helped Stack deliver turkeys for 12 years.

They arrived at a large white residential building on Palisades Avenue, which stands directly above Hoboken and the river, face to face with midtown Manhattan on the other side.

“This is where I grew up,” said the mayor, son of a train conductor. “In this building. My mother was the super, and she used to make my brother and me sweep the sidewalk here.”

He smiled, maybe with the knowledge that it was in part his mother’s example that now prompts him to grab his cellphone to call public works whenever he sees graffiti or litter on his streets. A sanitation truck brought up the rear of the whole Saturday operation, in fact, with a work crew quickly dispensing of the discarded turkey boxes.

Stack lived across from the old Yardley soap on a rope factory, now vacant – and next to a sewing factory turned Arabic bakery. He went to Our Lady of Deliverance Church, now boarded up with its back to New York.

“That’s why they’re losing parishioners,” said the mayor, during a discussion about what he sees as the church’s less than vigorous civic engagement, in his experience locally.

They went down Palisades and up the side streets, tracing a route the old timers knew well, of apartment buildings and some stand-alone homes, with Stack waving to people who waved at him in the street, calling out, “Happy Thanksgiving.”

“What, were you a sergeant back then, when you used to see me campaigning here?” Stack asked Police Chief Charles Everett, who was among the Thanksgiving workers.

A couple approached the mayor at one point.

“Of course. Get them a turkey over here.”

A few blocks up, another man went to Stack and said he was homeless and living in the woods and wanted a turkey.

“Come to my office Monday morning if you’re interested in a part-time job as a sweeper,” said the mayor. “Take a turkey. But be careful cooking it in the woods, don’t start a fire in there.”

Observing his boss tear into another block, Mark Albiez, chief of staff, said of his education in Stack’s brand of street politics, “It’s like going to Harvard.”

In one building on Palisades, the door to a first floor corner apartment opened and an older woman, thin with blonde curly hair, exchanged greetings with a crew of volunteers bounding through the hallway and handing out turkeys.

“God bless you, Mrs. Stack,” a worker told the mayor’s mother, who was the super there until recently.

“And God bless your son.”

The crews worked until 9:30 Saturday night and completed all of Union City. The plan Sunday was to head into the other towns of the 33rd District and on Thanksgiving Day, the mayor’s civic association will serve communal dinners at four locations. 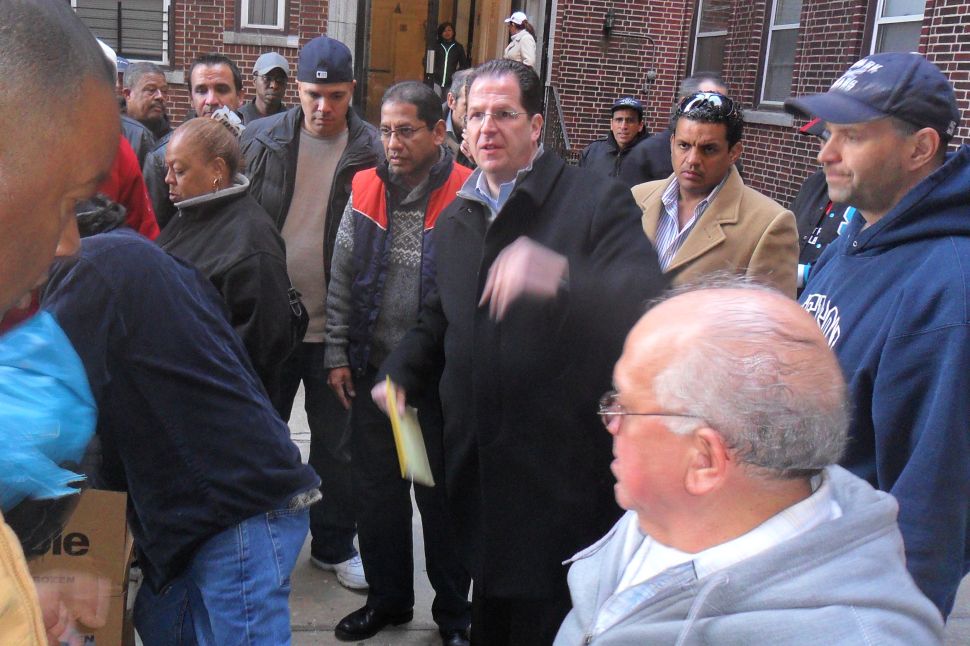