Christie told a rowdy, mostly elderly crowd of Ocean County supporters about his rooting out of duplicative services and unnecessary perks, his Herculean attempts at sweeping reforms, and his past, present, and continued support of shared services – contrary to Sweeney’s ascertain earlier today in Trenton that Christie was against the idea.

Getting his message across to this crowd was easy, made easier when a man from the crowd – wittingly or unwittingly – served an education reform bullet point up on a platter for the governor.

Toms River School District Superintendent Michael Ritacco was recently arrested on an 18-count fraud and bribery indictment, and was accused of pilfering millions from the district.

The questioner asked Christie why the county government couldn’t just handle the superintendent duties for all of the districts in the county.

“There is legislation in the legislature right now to do just that,” Christie said of toolkit bills number 24 and 25, giving county superintendents control over union and district superintendent contract approvals and implementation of shared business functions across districts and with municipalities.

“The question is how much of an appetite the legislature and the courts have for that,” Christie said standing next to his large Reform Tour sign that pronounced 42 days left for the legislature to act on his reforms before taking their winter break.

The state’s new 2 percent spending cap goes into effect in January, and mayors need the tools to make their budgets work, Christie has maintained.

“I got involved in politics when I was 14 years old,” Christie said, when he started working for a local Assemblyman who decided to run for governor.

“He came to our school and I just fell in love with him,” Christie said of the soon-to-be Gov. Tom Kean.

First, find a candidate you believe in, Christie told the young man.

Second, “Don’t think that there is any work in politics that’s beneath you.”

Christie said he watched his former law partner and confidante Bill Palatucci, start as a campaign driver for Kean.

“By 1985 he was the manager of Tom Kean’s reelection campaign,” Chrstie said.

Christie said he was glad to see some Republican representation in his former town of Livingston, “a Democratic bastion,” where it was hard being GOP in blue Essex County.

“Kind of like being a Republican in Hudson County,” he said, “or like being an Ocean County Democrat, for that matter.” The crowd cheered.

A man congratulated Christie for his no-spin handling of David Gregory on Meet the Press last Sunday.

The country is “curious” about Christie’s administration because, Christie said, “They haven’t seen anybody be New Jersey on network television and across the country.”

“Somebody’s trying to twist my words, I wasn’t going to let him go on for another three minutes,” he said. “We’re tough, we speak our minds, and we don’t take any guff from anybody.”

Christie told the story about his trip to the Labor Day parade in South Plainfield with his 14-year-old daughter.

With some boo-birds in the crowd, Christie’s daughter was a bit distraught, until he explained that most of the crowd weren’t booing; most were cheering: “75 percent, that’s really good,” he told her.

One woman waving a cigarette at him said, “I can’t wait to vote you out of office,” to which he responded, “Three years sweetheart. Stay healthy, I want you there.”

His daughter was rolling at his response.

Another woman yelled, “Stop closing all the hospitals,” to which he replied, “I haven’t closed any hospitals.” The woman apologized, he said, as he turned to his daughter: “See, I turned one.”

And looking back, he said the woman yelled, “Sorry, I thought you were Corzine.” 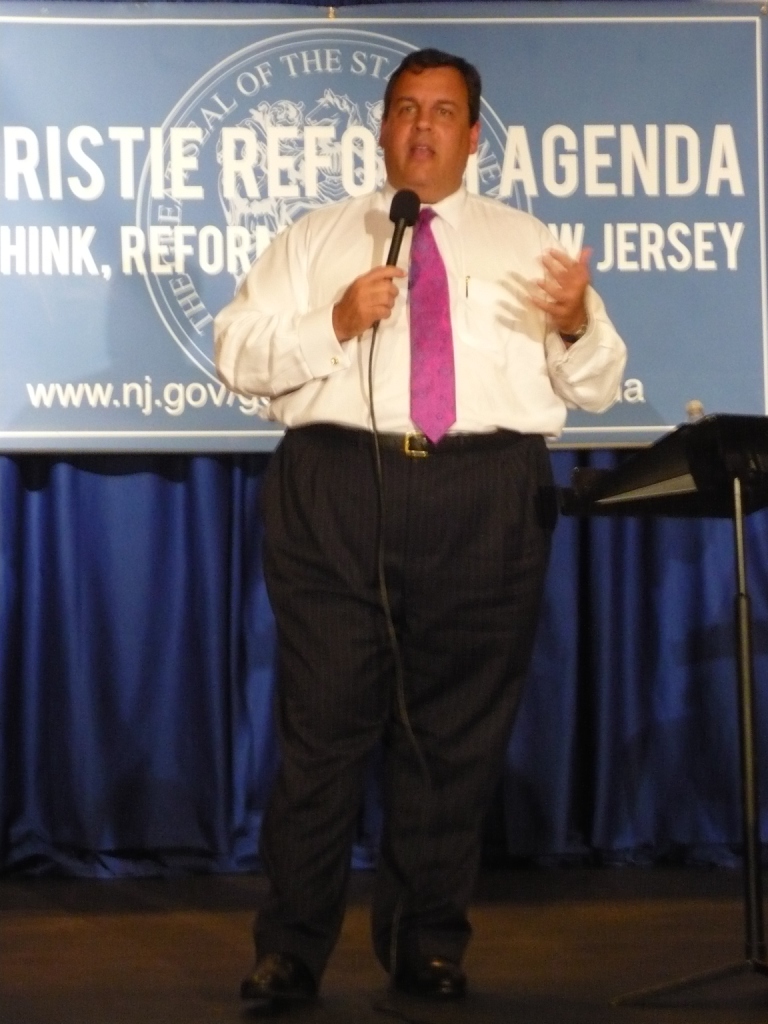