In the beginning, the tax code was created. This has made a lot of people very angry and has been widely regarded as a bad move.

This state has – or maybe had – a problem, which was this: most of the people living in it were unhappy for pretty much all of the time. Many solutions were suggested for this problem, but most of these were largely concerned with the movement of small signed pieces of paper, which was odd because on the whole it wasn’t the small signed pieces of paper that were unhappy.

Thirty-three is the answer. The question is how many small pieces of paper have to be signed to make people happy, and reduce the correlation between tax bills and coronaries.

When Gov. Chris Christie was elected last year, he walked down Lowe’s municipal government aisle and grabbed a box made from a 2 percent cap on property taxes.

But the checkout line is long and the Democrats are running the register.

Christie presented the package of bills to the legislature on May 10, 2010, and with 41 days to go before the end of the legislative session, only six bills ready for voting.

The cap on property taxes takes effect in January.

Roughly a dozen bills are being been held up because the legislature is waiting on cost analyses, according to the Democrats.

Of the pack, only arbitration reform has been given the verbal go-ahead by legislative leadership for a vote, although the Senate has committed to a vote on civil service reforms as well.

But Christie said the measures will avoid worker layoffs, and many government officials – from both sides of the aisle – have rallied his call for reforms.

State Sen. Steve Sweeney (D-West Deptford) held a press conference yesterday to say that Christie forgot to include a tape measure in the kit: shared services.

But with only 41 days left and only two voting sessions for the legislature, Christie said Sweeney was distracting from the task at hand.

Over a dozen legislative committees met on Monday, but few tool kit bills were on the agendas.

Passing the tool kit will be no easy feat for the governor, popular as he is, especially since the Democrats re-established their majority on Election Day with several key wins.

But opposition will not be easy for the Democratic leadership either, considering Christie’s well-established alliance with Essex County Executive Joe DiVincenzo, who controls a handful of Democratic votes.

Many of Christie’s reforms, like the salary cap on school superintendent pay, do not require legislation.

About 70 percent of the superintendents currently earn above the proposed salary caps, costing school districts a total of $9.8 million, according to the administration. The changes in regulations – scheduled to take effect on Feb. 7, 2011 – also introduce performance bonuses set by local districts.

Below is a list and continuing update on the 33 bill tool kit.

1. Constitutional amendment to impose a 2.5% cap on increases in the property tax levy increases for municipal, school and county taxes, cap banking is allowed.

— 5/20/2010 Introduced in the Senate, Referred to Senate Budget and Appropriations Committee

3. Reform in selection of arbitrators for union contracts.

4. Arbitrators are mandated to consider impact of union contracts on property taxes, no such requirement in current law.

5. Arbitrators are barred from making contract awards that exceed 2.5% cap, inclusive of all salary, benefit and other economic contract provisions.

–6/3/2010 Introduced in the Senate, Referred to Senate Education Committee

10. Allow furloughs by local government to save costs.

17. Give Civil Service Commissioner more day-to-day control as when the Department of Personnel was a freestanding department.

21. Expand parties that may bring challenges to Council on Local Mandates to include groups, like the League of Municipalities.

22. No school contract award in excess of 2.5% cap, inclusive of all salary, benefit and other economic contract provisions.

25. Executive county superintendents would be required to implement sharing of school business functions across districts and with municipalities.

28. Designate State colleges and universities as employer of record for collective bargaining.

29. Allow state colleges and universities to hire faculty members for a probationary period.

30. Remove classified employers from Civil Service status and include them within each institution’s personnel system.

32. Require only single ballot to each household instead of multiple ballots to all voters residing in household. 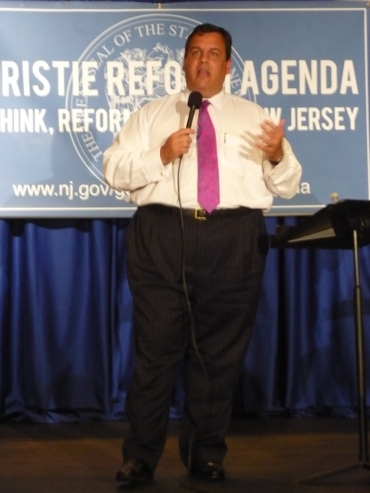