The GOP freeholders-elect this week tapped the former freeholder to lead their transition team as Republicans prepare to take charge of Bergen County.

In honor of Veteran’s Day. A WWII Navy vet and the father of NJN News anchor Jim Hooker a few weeks ago paid a visit to the U.S.S. New Jersey, 60 years after seeing her in Tokyo Bay when he supplied the ship as a crew member of the U.S.S. Cheleb.

Up for re-election in 2012, the Democratic senator now must go into hard-boiled rebuilding phase at home. He has a 38% approval rating, according to Quinnipiac University.

The President now stands at the lowest point yet of his tenure with New Jersey voters as 46% approve of the job he is doing in the White House. This is the 2008 presidential canidate who won New Jersey with 57% of the vote.

True, the governor received good news this week as Quinnipiac University released a poll showing his approval rating at 51% and support for his decision opposing the Access to the Region’s Core (ARC) tunnel project. But ghosts from the campaign trail clattered back into the picture as a federal inspector general released a report noting Christie’s lavish lodging habits while he was U.S. Attorney. The guv also questioned global warming out-loud, soliloquizing that might prompt someone to hand him a bullhorn in Idaho, but can’t ultimately help him here. A town hall meeting in which at least one Jersey guy tenaciously went toe-to-toe with the governor likewise showed paint coming off the Christie barn.

A poll released on the Access to the Region’s Core (ARC) project showed support for Christie’s decision to drive a stake in the project. That was 53% of those polled who didn’t agree with Lautenberg’s baby. 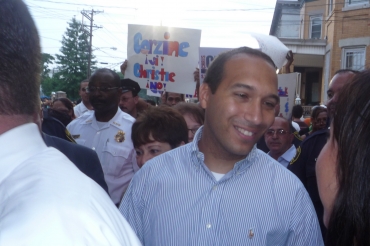