“I will be running against Diane Allen (pictured),” said the 64-year-old retired teacher who lost a 2003 primary to the incumbent senator.

Both women live in Edgewater Park.

“Money shouldn’t be used for murdering babies,” said Moore, who, like Gov. Chris Christie, opposed an allocation of $7.5 million for women’s healthcare clinics.

“Maybe the time is right for my candidacy,” said Moore, a self described staunch pro lie and pro Second Amendment proponent who held at least one Tea Party event at one of her four area inns. 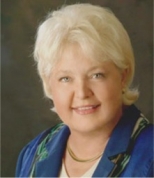