Based on the “Georgia Work$” job-promotion program, Back to Work NJ provides workplace training to eligible unemployment collectors without putting their unemployment benefits at risk.

The program also affords up to $100 per week to the individuals to help defray training costs like transportation, clothing, and child care. The legislature is appropriating $10 million for the program.

State Sen. Steve Oroho (R-Franklin) asked Greenstein, “Couldn’t we also amend our current training programs to do the same thing, instead of creating a new program?”

A lot of the existing programs are federally funded, she said.

“There could be some problems with mixing and matching (funding) with this one…This is a unique idea, to have people be able to train while they’re receiving unemployment.”

Chairman Paul Sarlo (D-Wood-Ridge) said, “I think we have better controls in place than Georgia (had in place with their legislation).”

Oroho and the rest of the Republicans weren’t willing to find out.

“I wish we would take a little more time to see how we integrate this,” he said, “so that we don’t have more administration (costs) and less money going into the program.”

The Back to Work bill, S2496, was released by the committee today, approved along party lines, 8-3-2.

The committee also approved S1216, which will allow small, women, or minority-owned businesses in urban centers to qualify for loans from the Economic Development Authority.

Another Greenstein bill, S2498, will allow unemployed residents to manage their unemployment benefit claims through the Department of Labor and Workforce Development’s website.

“This change will, quite simply, give New Jersey businesses significant tax relief as they continue to work through the recession,” said Assembly Budget Chairman Lou Greenwald (D-Voorhees), the prime sponsor.

The bill modifies the business tax formula used to determine the corporate income subject to tax by the state from a three-factor formula to a single sales factor formula.

The Angel Investor Tax Credit Act, A3592, which provides incentives for tech investments, was passed out of committee with Republican opposition.

“I don’t know how much difference these investment are going to make,” Webber said. “I’d love to hear an angel investor opine on how a 10 percent tax credit will affect their investment.”

Although Webber and other Republicans opposed this and other bills, some pieces of Democratic legislation received their support.

Though many of the vote counts from committee today didn’t show it, there was some bipartisan support flowing from the statehouse today.

“I appreciate your outreach…to include some Republican bills,” O’Toole said. “Is there some thought, Senator, about having some economists come in (to update the committee on the current fiscal climate)?”

Sarlo agreed, “I think it’s something we should look at, especially before the budget…We can put together a panel of some experts, both in-state and out-of-state.”

At that, state Sen. M. Teresa Ruiz (D-Newark) reached back across the aisle to side with O’Toole on concerns over whether the job stimulus would work.

“We’re really taking a leap of faith here in launching an economic development initiative that I’m sure will prove positive for the state of New Jersey. My only moment of, just, uncertainty is that, at some point, just to be responsible and have our due diligence, that we do take an opportunity – whether it’s three years, five years – since none of these bills, to my understanding, have a sunset provision in them that when times do get better that we’re not extra, giving away funds at the expense of losing on another,” Ruiz said. “I agree with Sen. O’Toole that we do continue to monitor so that these bills and the intent do prove positive for the state of New Jersey.” 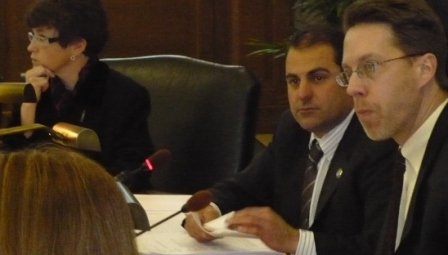