Since1992, Bernie Sanders has been on my list of heroes along with such people as Ralph Nader, Thurgood Marshall, and my dad, Bernie Novick.

I first met Bernie on the streets of Burlington, Vermont ––when he was running for Congress early in the summer of 1992. I was up in Burlington, playing a comedy club and Bernie was campaigning on the streets of the town where he was Mayor from 1981 to 1989. He approached me with a big smile, and in his Brooklyn accent asked me where I stood on the issues impacting the state.  When I told him I was not from Vermont but from Brooklyn, he chatted me up anyway.

I asked him for one of his campaign buttons for my dad––  (Bernie was so well known in Vermont that his button just had one word on it ––”Bernie”). I told him my dad was named “Bernie” and was also from Brooklyn, and he said to me, “Then he must be a good man!”

Years before, I had read about Bernie in a New York Times Sunday Magazine section article about the “only  self-described socialist mayor in the United States”.  The article went on to describe how Bernie had been born in Brooklyn, and moved to Vermont and ran for mayor and beat out more well-funded Democratic and Republican candidates. Through his success as mayor in revitalizing Burlington’s downtown and his personal popularity, he served several terms.

After meeting Bernie that summer in 1992, I decided to support him in his race for Congress. And so, I organized a comedy show benefit that included myself, comedians Scott Blakeman and Henriette Mantell.  The Sanders for Congress campaign arranged a location at a club in Brattleboro for October 14, 1992 (which happened to be the night of the Gore quail Stockdale vice presidential debate).

Scott is a wonderful political comedian who has worked for free for good political causes for many years. Henriette is someone you may know from The Brady Bunch movie, where she played Alice the  Maid, and from her work as the co–producer of the documentary on Ralph Nader, “An Unreasonable Man”.

The comedy show only raised about $7000––but they told me that that was a sensational amount for any congressional race in Vermont.

I am still a strong supporter of Pres. Barack Obama, although I am disappointed in his continuation of several of the Bush policies including not closing Guantánamo, sending more troops to Afghanistan to lengthen  that senseless war, and continuing the Bush tax cuts. Bernie Sanders has been on the right side of these issues since the very beginning.

And so, for his unwavering dedication to do the right thing and take a stand––even for eight and a half hours  in his recent filibuster––I award Bernie Sanders  the Mensch of The Year 2010.

By the way, he gave me the Bernie  campaign button, which we have to this day. 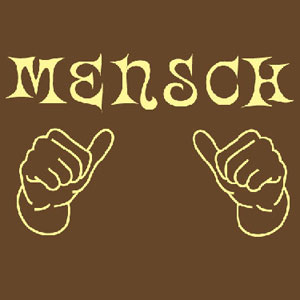