It’s that time of year again to get out your unadorned aluminum pole, and celebrate Festivus.

For those of you unfamiliar with the holiday of Festivus, “the holiday, as portrayed in the Seinfeld episode and now celebrated by many, includes practices such as the “Airing of Grievances,” which occurs during the Festivus meal and in which each person tells everyone else all the ways they have disappointed him or her over the past year. After the meal the “Feats of Strength” are performed, involving wrestling the head of the household to the floor, with the holiday ending only if  the head of the household is actually pinned.”

And so, in the spirit of the holiday of Festivus, I share with you today how people  in New Jersey politics have disappointed me  over the past year  2010:

Gov. Chris Christie:  How could anybody expect this Governor not to be on the list of any Democrat in New Jersey celebrating Festivus?
Losing $400 million in Race To The Top Funding. Vilifying NJEA. Yelling at teachers and reporters. Stopping the ARC Tunnel. List too long to list here. No wonder his tide is turning more than the Jersey Shore’s.

Bear Hunters:  What’s the matter? Hunting and killing Bambi not macho enough for you? So, you need to go after Yogi and Boo-Boo?

State Senator Loretta Weinberg: For not getting elected Lieutenant Governor. I know it is heaven to have you in the Senate where you still give them hell. But, I know as Lieutenant Governor you would have done so much more than just look adoringly over the shoulder of the Governor as he vetoes bills.

Senate President Steve Sweeney: For his abstention on Marriage equality, and lack of leadership in general. Has not lived up to all the leadership hype as of yet, and is pale in comparison to his predecessor. Lots more will
be expected in 2011.

Assemblyman Alex DeCrocce: For his Scrooge-like opinion about the unemployed work force in NJ being lazy: (“I’m one of the few people here … who feel that benefits are too good for these people,”). And he is the Co-Chair of the Bipartisan Leadership Committee? What a moron.

Wally Edge for revealing himself: This is a secret that would have survived just fine, like Dear Abby or the Dread Pirate Roberts.

The entire Republican Congressional Delgation from NJ: For being on the wrong side of history and not voting to repeal “Don’t Ask/Don’t Tell”—Including my own Congressman Leonard Lance. Land mines don’t make distinctions  based on sexuality  and neither should you. Shame on you all.

The 44 folks indicted for corruption: The electeds and rabbis who went to trial this year did nothing to enhance the reputation of New Jersey corruption, and just served to help the folks who produced “The Soprano State” make some bucks.

Cast of “Jersey Shore”, “Real Housewives of New Jersey”: Not quite as bad as the Corrupt 44, but you are enablers of the Jersey jokes written for late night hosts Leno, Fallon, Letterman and Ferguson. Snooki, please go back to NY.

Statue of Lou Costello: For not coming to life and making us laugh all year. We needed some good laughs this year, and you were not on First.

Mayor Anna Little: For distorting Frank Pallone’s record over and over again in your campaign for Congress. And for your wacky ideas on governance.

Future Ex-Congressman John Adler: For voting against the healthcare bill  because he thought  it would give him a win in the second term; and for having a hand  (if true)  in running a fake Tea Party candidate.  While I was proud of State Senator Adler, Congressman John Adler disappointed me.

The entire New Jersey population at large:  Over the last decade New Jersey’s population grew, but at a rate  much more slowly then either Texas or Florida.  I am very disappointed that the New Jersey population could not distract itself more often  from watching the Jets or Giants, reading the Star-Ledger  or the Asbury Park Press or listening to Jon Bon Jovi or Bruce long enough to schtup more often to increase your numbers. Now the very Republican states of Texas and Florida will have more influence in Congress.

And I am sure you can add your own.

Now, on to 2011, and the Feats of Strength. Between being a legislative election year, and a year we lose a Congressman, we will need all the strength we can muster. 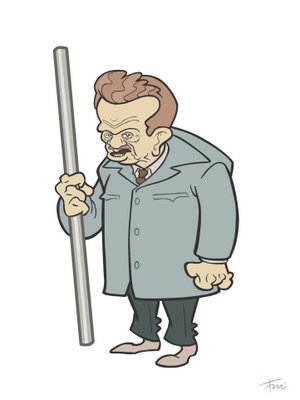