WAYNE – The costs of public safety were inflated, supporters of this bill say, by arbitrators who bended to the will of police and fire unions.

Gov. Chris Christie scored his biggest legislative win today since the 2 percent cap, and this win capped off his year with the toolkit countdown clock stopped at zero to his right (conspicuously sitting beside state Sen. Pres Steve Sweeney (D-West Deptford)).

He kicked off his toolkit reform tour late this summer in Wayne, and today he returned to sign the “most significant individual bill in the toolkit.”

“(B)ack to where we started,” he said. “I know Assemblyman Rumana thought it was because it was his hometown.”

Scott Rumana (R-Wayne) stood laughing with a stock of legislators behind Christie, as the governor put his name on the bill using four pens, one for each of the leaders of the Senate and Assembly who he said made this happen.

“It’s our job to compromise when we need to,” he said, “without compromising our principles.”

Christie denounced the “conniving” and “sly” way pay increases that snuck into arbitration deals in the past.

No more, he said, and there are now “real fast and hard deadlines.”

The bill creates ethical standards and random selection for arbitrators.

Admittedly not his idea, Christie still stood up for the 39-month sunset on the bill, which was interestingly stretched from an initial 36 months as proposed by the Democrats to extend beyond the final days of Christie’s first term in office.

He also said his fight for the 33-bill toolkit has not been diminished, even with the ramp up for 2011, the year of education reform.

“We’re going to continue to work on (those bills),” he said, but for today, “This is meaningful reform.”

He gave a nod to Sweeney for bringing the issue of arbitration reform to the table years ago, to which Sweeney said today, “(I) had my head handed to me.”

“Arbitration works when its balanced,” Sweeney said, noting that he’ll also be pushing for pension reform: “So people will have one.”

DeCroce, a week removed from a verbal gaffe, called Christie “a mover and a shaker” who moved and shook the gridlock in Trenton. 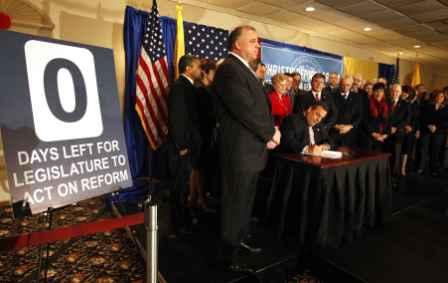