Of the three dozen appointments he made, the majority were unpaid positions on various boards. At least, that was the explanation McNerney laid out to PolitickerNJ in the halls of the Statehouse this week.

The BCIA is Bergen’s powerful financial arm, freed from direct oversight and charged with managing the debt of the county – the same place where former chairman Ron O’Malley is accused of carrying out his mortgage frauds.

Republicans are pleading to hold up these plum board seats, but no one is listening.

Today, Mike Gartland of The Record reports that McNerney gave out $402,000 in raises to politically-appointed employees, breaking administration promises to unions that agreed to furlough employees, rather than face layoffs.

In 2009, the non-union workers accepted a 1.3 percent increase, and a zero increase in 2010. That is, until the county gauged its surplus – roughly $20 million, Hague said – and found some funding for non-union raises.

He said the 3.5 percent raises in question were fair and equitable, especially considering County Executive-elect Kathe Donovan’s promise to freeze pay next year.

Since Donovan cannot nix pre-negotiated raises, the non-union workers are expecting no increase in their immediate future.

McNerney’s top administrator, Tim Dacey, who has left the county and returned to Bergen Community College, did not speak to Gartland, but told PolitickerNJ today that union rep, Gerry Drummond, is misremembering the situation. Dacey said he never promised Drummond that he wouldn’t give raises to the non-union employees in order to secure furloughs from the union.

“I never made that promise,” Dacey said. He said he told Drummond that the non-union employees hadn’t gotten a raise the year before, or to that point this year.

“I can’t promise into the future,” he said, noting, beside the point, that the non-union situation has no relevance to the union. He also was following advice from counsel by not promising anything.

“I’m not sure where he’s dreaming this up,” Dacey said.

Drummond did not return calls for comment, but was an integral supporter of McNerney in the run-up to the election. Two union members accused Drummond of quashing opposition and delivering McNerney’s union endorsement from inside the county building. 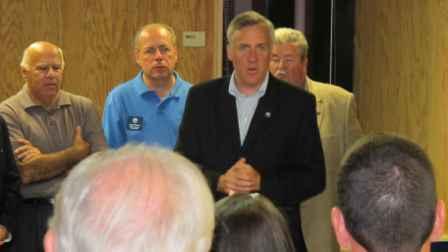