NEWARK – An unlikely pair of New Jersey politicos, one from Essex and the other from Hunterdon, reflected on the career of the late U.S. Sen. Clifford Case (R-Rahway), a moderate even liberal Republican, the stylistic antithesis of the sitting Republican governor, who was famously gobbled up by his own party in the 1978 GOP Primary.

Asked several weeks ago why he likes Republican Gov. Chris Christie, who would never be mistaken for a liberal but is known nationally to speak his mind, North Ward Democratic leader Steve Adubato Sr. leveled a steely gaze across a table in the North Ward Center.

“I am perceived statewide as a Democratic Party boss, but, understand, my parents were Republicans,” Adubato told PolitickerNJ.com. “The thing is, though, is if you wanted to get involved in politics here in Newark, you had to be a Democrat. Republicans here were good for poetry maybe, but not politics. But you ask me who my favorite New Jersey senator is and what do you think the answer is?”

He leaned forward, eager to hear a fast answer. Well, it probably wouldn’t be U.S. Sen. Frank Lautenberg (D-Cliffside Park). The two men were never close and Adubato famously told the sitting senator in 2008 that he was too old for the job before he endorsed the ill-fated candidacy of U.S. Rep. Rob Andrews (D-Haddon Heights) in the Democratic Primary.

The context of the question created a logical answer.

“Bingo,” said Adubato, in recognition of the late GOP senator who served in the senate for 24 years. “My favorite senator was Clifford Case.”

Earlier this afternoon, apropos of Adubato’s admiration for Case, a rangy man bundled into a winter overcoat walked up the stone stairs and entered the Victorian Mansion that Adubato converted into headquarters for his Blue Ribbon charter schools and community service centers.

It was Matt Holt, a Hunterdon County freeholder and grandson of Case, here to sit down with the Adubato at the invitation of PolitickerNJ.com given the two men’s blood and political connection to the one-time Rahway councilman who ran for the Assembly and later Congress and the Senate, who died in 1982.

When they met, Holt presented a button to Adubato – “Case for Governor” and Adubato handed over an early piece of literature about the North Ward Center that contains a reference to Case’s support for the educational establishment founded by Adubato.

“Case was a statesman,” the Newarker told Case’s grandson. “But he had a problem, which ultimately undid him politically and that was a problem that remains to this day with the Republican Party.”

“He was beaten by the Newt Gingrich wing of the party,” said the freeholder. “My grandfather was always elected with the backing of the AFL-CIO, and his legacy, I think, was his support for Civil Rights. The hard-right wing of the party recruited an out-of-state candidate (Jeff Bell) from Texas who defeated Clifford Case.”

“Remember, that was the year Bill Bradley was running – Bill Bradley, a former basketball star who everyone said had no experience in politics,” said Adubato. “He won, though, against the organization-backed candidate, and everyone before the primary figured the race would be a walkover for Case. Either candidate, this was a veteran U.S. Senator with cross-party appeal, not a partisan, potentially running against a neophyte professional athlete. No contest.”

“And Bradley beat Bell to become the senator,” said Adubato.

“Yes,” said Holt. “My grandfather told my mother that if he was going to lose it would be by a challenge from his own party, and he turned out to be right.”

“They were committed environmentalists. Their appeal was essentially technocratic and “good governmentish,” running against urban machines and corruption (think Thomas Dewey). They opposed, however, anything far-reaching, and always looked out first for the interests of business; they were loathe ever to use populist rhetoric.”

Holt last year repeated his grandfather’s story on a smaller scale, as he failed to get organizational backing in Hunterdon – in part, he maintains, because he’s perceived as a liberal.

“Do me a favor,” said self-identified radical Adubato. “Don’t ever refer to yourself as a liberal. Liberals are generally smart and well meaning people. They want to do good.” But they aren’t, in his opinion, good at telling other people when they’re full of it, and so aren’t ultimately effective politically.

Case was effective for nearly thirty years, but finally felt the undertow of his own party.

“Remember, Holt was the last Republican to be elected U.S. senator,” said Adubato, who maintains that no perceived moderate can get out of a NJ GOP Primary without getting banged too far rightward.

“We eat our own,” Holt assented. “I’ll give Democrats credit at least for sticking together in support of their candidates.”

But given his aversion to liberals and his embrace of unapologetically conservative Christie, Adubato’s lingering but unmistakable affection for Case begs the question, “Why?”

“I’ll have to call you back on that one,” he said, smiling pragmatically in the knowledge that ideology ultimately must kowtow to power: a prized connection, then as now, whether wielded by Case or Christie, both GOP helpmates ultimately to a storied educational operation.

“Partisanship has got to end,” he added. “It’s killing us.”

And as he took Holt on a tour of the Robert Treat Academy, once supported by Case at the outset and the very place Christie began his journey as gov.-elect the day after he defeated Jon Corzine, Adubato contrasted the annual cost per pupil costs there of $9,800, compared to $17,978 in Newark public schools and $14,359 (the New Jersey state average), and the latter marveled and spoke to the parents and students alike and was proud to be part of the story through the work of a late statesman, still remembered and celebrated in the North Ward.

“I looked up to him,” Adubato said of Case. “He was nice to me. Common people responded to him. I respected him.” 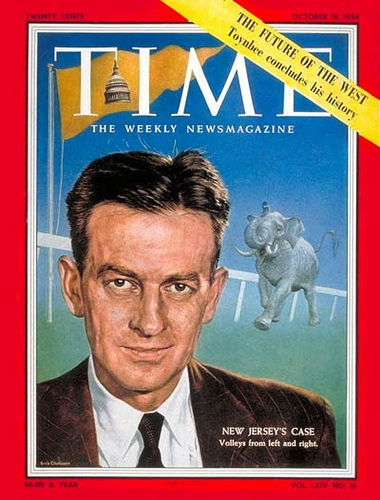