TRENTON – If education really is the “the civil rights issue of our time” – as Gov. Chris Christie calls it – then Christie better hope Christopher Cerf has some Dr. Martin Luther King, Rosa Parks, and Jackie Robinson in him.

With Christie branding 2011, the “Year of Education Reform,” he admitted it will be a “very, very interesting and challenging year.”

Cerf, a 56-year-old registered Democrat, is a teacher-turned-lawyer from Cincinnati who was an associate counsel for Pres. Bill Clinton’s in the mid-90s.

“The first thing I plan to do is learn a lot,” Cerf said. “There are several aspects of school reform that are universal. I’m not going to get into policy detail.”

Christie praised his “record of reform and innovation,” both as deputy schools chancellor in New York City and as president of Edison Schools, Inc., the largest private-sector manager of public schools in the nation under Cerf’s direction.

Cerf talked about his support for differentiated pay, although he was a little round-about in his criticism of tenure – “I don’t think it’s worked very well” – unlike his new boss.

Cerf is also a proponent of charter schools, but is as reportedly as hard on them as the traditional public schools.

“I’m for anything that works,” Cerf said. “We’re in a country where ZIP code is destiny,” as far as schools are concerned.

Given the governor’s battles with the big teachers’ union, Christie was asked if he had any advice for Cerf coming in, but he listed none.

“I find it fascinating that there has been all of this focus on my tone,” Christie said, making the argument that the NJEA took the first swing, spending nearly $8 million in attack ads on the governor.

Cerf stood next to Christie and Acting Commissioner Rochelle Hendricks, who is stepping back down. Christie praised her handling of an “extraordinarily difficult situation” when he fired his first commissioner, Bret Schundler, following the loss of $400 million in Race to the Top finding. 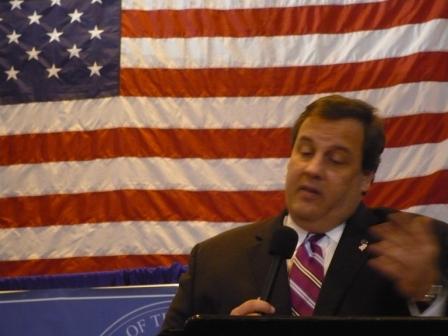