SOMEWHERE SOUTH OF NEW JERSEY (AS IF IT MATTERS) – Republicans outmuscle Democrats here on the train and it stands to reason, of course – this is The Continuing Story of Gov. Chris Christie and company, so why would Assembly Majority Leader Joe Cryan be a lively spirit here in the center aisle, as he has been in the past?

In fact there’s a statement from Cryan right now, minus the man and absent all glad-handing.

“We know all too well based upon the failed Republican experiments of the 1990s that privatization doesn’t save money and will lead to poor customer service,” says the Democrat in a statement upbraiding a Christie plan Cryan says would privatize tolls. “The more than 850 people who would lose their job under this scheme are working class New Jerseyans with families who are dedicated to their jobs. Their mistake – not being millionaires in Chris Christie’s New Jersey, where only the rich are living better.”

Back aboard, there are more grins than fins.

“Light,” says former Gov. Brendan Byrne when asked to characterize turnout to the chamber trip, and from his vantage point – Essex County Democrat – it is less than robust.

“It’s amazing that all the gridlock occurs in the car top-heavy with Republicans,” deadpans Assemblyman Gary Schaer (D-Passaic).

Amid a clutch of Democrats stands Hudson County in the person of Assemblyman Jason O’Donnell (D-Bayonne) and he’s jostled in an aisle that also contains Assemblyman Gary Chiusano (R-Franklin).

They have an urban meets rural bipartisan backstory that makes their cross-the-aisle proximity that much easier.

It was former Assemblyman Tony Chiappone from Bayonne who once sponsored legislation to put a shotgun killshot in the bear hunt in New Jersey, and shortly after O’Donnell took office, Chiusano collared him and got him to promise – as an urban legislator – not to meddle with the bear hunt.

There’s a picture on the wall by the bar and it’s a group shot of Christie and First Lady Mary Pat Christie, state Sen. Joe Kyrillos (R-Middletown) and other presenters at the New Jersey Hall of Fame 2010 event. Among them sits biotech Republican hotshot John Crowley, rumored to be a 2012 candidate for U.S. Senate – scuttlebutt fueled by Crowley’s $25,000 chip-in to Reform Jersey Now, Christie’s apparently now defunct fundraising arm.

“We’ve got to get through 2011,” says Kean, swatting away a PolitickerNJ.com question about Crowley and U.S. Senate. Kean was the 2006 GOP nominee and may run again, but he won’t talk about it – not now.

“Wonderful opportunity to network with some of the state’s best leaders and to dialogue with one another about the future of our state,” Holley says.

But these local celebrity sightings add little luster to the big, statewide nimbus of this trip.

“Chris Christie,” says Dr. Brigid Harrison, political scientist from Montclair University, referring to the freshman GOP governor. “He’s the story. If you talk to people on the train, the sense is the worst in the state is behind us and we are becoming a more business-friendly environment.”

Although, she admits – confirming Republican legislative worries in an election year about deep-impact local aid and school cuts – “It’s going to be an interesting year budgetwise.” 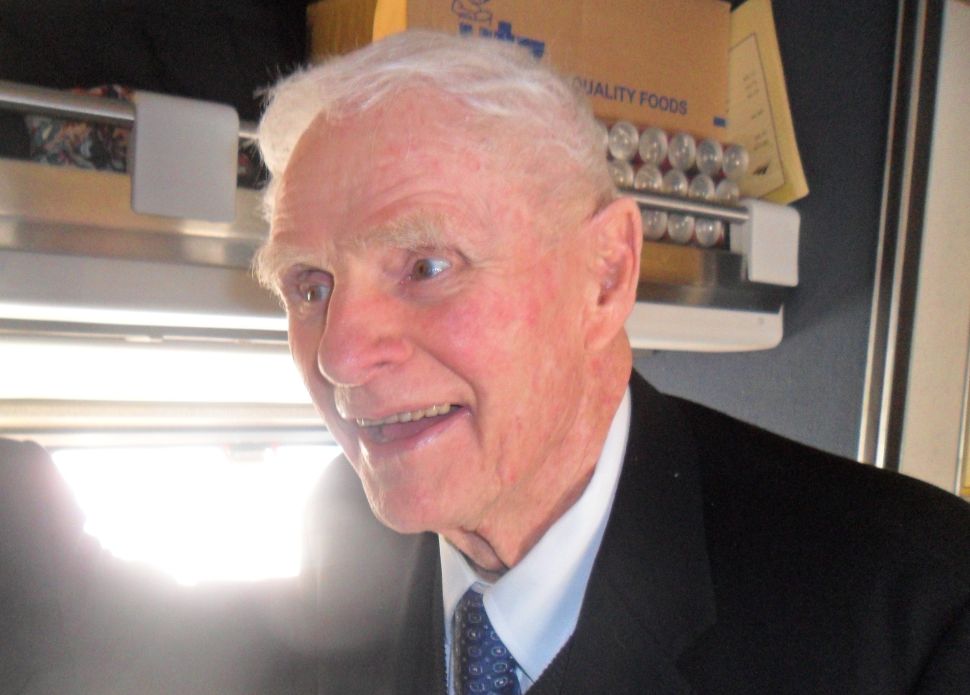