Gov. Chris Christie responded to yet more criticism of his absence from the state during a snow storm late last month that dumped more than two feet of snow on portions of New Jersey.

This time the jabs came from former New York City Mayor Rudy Giuliani, who told MSNBC’s Morning Joe that Christie should have hopped the first flight back.

“Chris should’ve come back,” Giuliani said. “I mean, if he asked me my advice, I would’ve said ‘They elected you governor, they’ve got an emergency, they expect you to be there.’ You know, you’ve got to be there if you’re a governor, a mayor, or even a president, if it’s important enough.”

Not one to take a shot like that lying down, Christie during an appearance and Fox News Channel’s Fox and Friends this morning, took aim at the former mayor’s eating habits.

“He’s wrong. I mean, he’s wrong. It’s easy when you are out of office to be shooting from the peanut gallery when you no longer have any responsibility, but I have a responsibility to my family. I would have never gone on the trip if we didn’t have a plan in place to be able to clear the snow. And unlike what you saw in New York City, you didn’t hear about those complaints in New Jersey. Substance is what matters. I’m just going to chalk it up to a bad morning for the mayor. Maybe he didn’t have a good breakfast or something like that.  My point is what matters are results. And what the people of New Jersey voted for me for was not to be on the back of a snow plow. They voted for me to get the job done. And, we got the job done.”

“I have great respect for Mayor Giuliani and maybe no bran that morning – I don’t know what the situation was, so we’ll just let it go. We worked extraordinarily hard. It was a big storm but we had a plan. And that’s what people hire an executive for, not to showboat, but to have a plan.” 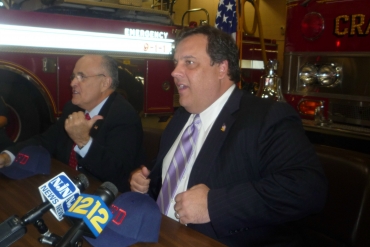