TRENTON – The Assembly Judiciary Committee approved a measure that allows victims of gender-biased violence to pursue civil charges faster and with broader opportunity for damages, including legal fees.

The bill is a state-level version of the federal Violence Against Women Law, which was found to be unconstitutional in a 5-4 decision of the U.S. Supreme Court.

The court said states could pass their own laws, said committee chairman Assemblyman Peter Barnes (D-Edison), and his committee has stamped their approval.

The bill rolled back a seven-year statute of limitations to two years, which Barnes said is roughly standard.

The bill allows for injunctive relief, which expedites the judicial process, and allows victims to be awarded compensatory damages, punitive damages, and legal fees.

“If I come up to you and punch you in the nose because you’re ugly,” said Assemblyman Michael Patrick Carroll (R-Morris Plains), no legal fees can be sought, only damages.

“But if I come up to you and punch you in the nose because you’re a man,” Carroll said to Barnes, legal fees are fair game.

Carroll opposed the measure on the grounds that it doesn’t treat all plaintiffs equally.

Another initiative taken up by the committee today failed years ago as a ballot referendum.

In 2008, a referendum to allow municipalities to appoint judges to joint municipal courts – rather than by the advice of the governor and the consent of the Senate – failed before voters, at least partially, because it was considered “poorly worded,” said Administrative Office of the Courts liaison Daniel Phillips.

But in order to provide incentives for municipalities to find shared service, in this case within their courts, the committee is again putting forth the constitutional amendment.

Of the four types of municipal courts, half are currently approved by the local authority and half by the state.

There are over 530 municipal courts in the state and the majority are single municipality operations. Of the local judiciaries, 70 percent belong to only one municipality, and the judges are appointed by the mayor and/or council.

Since the 2008 push for shared services, the state has seen a spike in the second type of court, the shared court agreement.

In these cases, two or more municipalities share some court services, staff, or facilities.

These agreements save some money and allow local officials to maintain judge appointment oversight.

The third type of court saves the most money, but removes local control over the judiciary.

Unfortunately, the municipalities have been unwilling to give up their appointment authority, Phillips said. Joint municipal judges are appointed by the governor with approval of the Senate.

Nineteen such courts existed in 2008 in 57 towns, and none have been added since.

The fourth court type is the county central court, although only Bergen County is eligible.

Their judges, like the joint courts, are appointed at the state level. 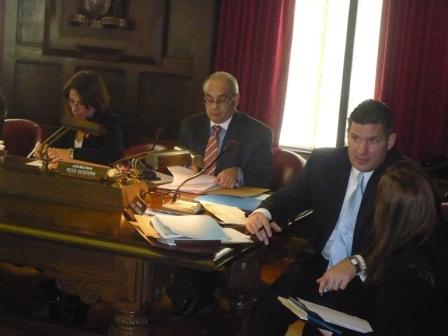