An amendment introduced during the final hours of deliberation over the bill to create Atlantic City’s new tourism district would divert 100 percent of the proceeds of a potential sale of the airport there to eight south Jersey counties rather than back to the city as the bill originally intended.

The amendment, which passed as part of the bill Monday was reportedly the result of negotiations between Gov. Chris Christie and Senate President Steve Sweeney (D-West Deptford), and originated in the governor’s office.

A spokesman for the governor declined to comment on the amendment, however several sponsors of the bill, including South Jersey legislator and former Atlantic City Mayor Jim Whelan (D-Atlantic City) say the diversion of the funds goes against the bill’s intent, which is to revitalize Atlantic City

Republican Assemblyman John Amodeo (R-Northfield) said he also was against amending the legislation.

“I was extremely disappointed (in the amendment),” Amodeo said, adding that the new tourism district will need money for revitalization and police presence and the proceeds from any sale of the airport would have been a valuable resource.

In November, Sweeney also touted the benefits of the potential sale to the beleaguered city, telling the Associated Press that the airport is a valuable part of the revitalization effort and that the sale would infuse the city with millions in cash to complete those projects.

But as a result of the amendment, if the airport is sold, the proceeds will now be split among Atlantic, Burlington, Camden, Cape May, Cumberland, Gloucester, Ocean, and Salem counties with none of the proceeds going toward the new tourism district.  The money would be used for transportation projects in those counties.

The airport is owned by the South Jersey Transportation Authority – a state entity, which bought it from Atlantic City in 1991 for $11 million.  Whelan, who was mayor at the time, said the sale made sense because of the huge capital expense demanded by the airport.

Whelan said the airport is likely worth more than that now, but that he knows of no plans to sell it and said finding a buyer would be difficult.

Whelan and other South Jersey Democrats speculated that Christie’s intent in pushing the amendment was to bolster the Transportation Trust Fund.

“The Transportation Trust Fund is not as well funded as it needs to be so if you had any kind f windfall from the airport, you have some money to plug in those transportation projects,” Whelan said.

Atlantic City Mayor Lorenzo Langford did not return a call from PolitickerNJ to address the amendment, but Langford is on record with his displeasure at the bill passed by the legislature Monday.

It’s unknown, or at least nobody will say, what the point of including the potential sale of the airport in the bill was as there is currently no plan in place to sell it.  But one theory suggests that the Port Authority of New York and New Jersey might buy the airport as it did in 2007 with Stewart Airport outside Newburgh, N.Y.

At the time of that purchase, Acting Governor Richard Codey signed legislation that would allow the PANYNJ to expand two airports – Stewart and another undesignated airport in New Jersey, said to be Atlantic City International Airport.

In November, Sweeney told the Associated Press that he is in favor of the sale or lease of the airport to the PANYNJ, or another entity. 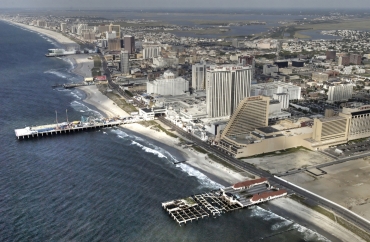