“He fought the illness like a soldier,” said Assemblyman Tom Giblin (D-Montclair), a lifelong friend. “‘No’ was not in his vocabulary. My condolences to his wife and family, but he made us all proud: Belleville, Essex County and the state community.”

Councilman Mac Donald competed in one of the most contentious Belleville council races in memory in 2008. His campaign headquarters was a veritable and dynamic museum of Irish American politics, featuring pictures of John F. Kennedy, Richard Hughes, Cryans, Giblins, Durkins, Codeys and Mac Donalds.

A proud patriarch, Mr. Mac Donald had twin granddaughters who campaigned with him on Election Day.

“I don’t know if you will become councilman today,” someone remarked to Mr. Mac Donald, “but whatever the outcome, you will always be a chieftan.”

Recognizing his obvious political skills, fellow Essex politicians were surprised that Mr. Mac Donald waited until close to the end of his life to run for office. His own campaign finally came when he was battling cancer, after a life of working on behalf of other candidates.

“I have a tremendous amount of respect for him, and for the way he fought to stay alive,” said Assemblyman Ralph Caputo (D-Belleville). “He has been through horrors. He fought to get out of the house to be there for the community. It’s a marvel the way he was able to deal with this. Not too many people could do it. He was a good guy.”

From his days as a tavern owner and later as a PBA leader for local 183, Mr. Mac Donald built deep and lasting friendships in Essex County politics. Hundreds attended a dinner in his honor last year and the 2010 Newark St. Patrick’s Day Parade was dedicated to him.

“P.J. had such a confident and comforting presence,” said Essex County Clerk Chris Durkin. “He touched thousands of lives and made each person feel needed and special. A truly great and good man.”

A former state party chairman, Ray Durkin said, “P.J. was an All American guy, who was easy to talk to. Everybody liked P.J. and he liked everybody. He was a councilman of Belleville but he was bigger than that.”

Councilman Mac Donald was scheduled this year to be the main honoree at the annual Friends of Brian Boru event.

“May God smile at him the way I know P.J. will smile at God,” said former Gov. Richard J. Codey. 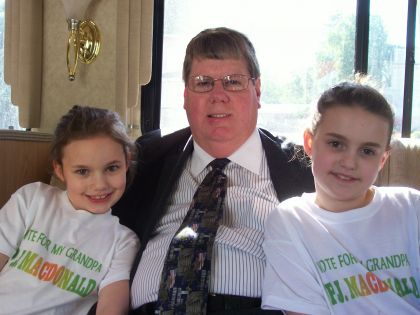