“I am sorry to inform you that I am resigning as Mercer County Republican Committee chairman effective February 1, 2011,” Wesley said in an email to committee members.  “I do so with some regret, but given the differences between some members of the county’s leadership team and me, there is really no way that I can continue to lead the county organization effectively.”

The resignation is a surprising reversal for Wesley, who had vowed that he would not resign despite the growing pressure from prominent party members.

Wesley first fell out of favor with the county faithful after the November elections, when the party was swept at the county level. Losses in the 14th District Senate race and the 12th District Congressional race were placed as Wesley’s feet though both were tough battles for the GOP.  Republicans had held the Senate seat in the 14th – which includes Hamilton and West Windsor – for more than two decades.

The letter, which was reportedly signed by 17 out of 54 members of the party’s executive committee, listed several gripes against Wesley:

After continued internal battling that at times grew nasty, the committee earlier this month voted to amend the party constitution to allow for the removal of a chairman, a change aimed directly at Wesley.  The committee was scheduled to vote on Wesley’s removal at an upcoming meeting.

Wesley took over the party in 2007 with the departure of former Chairwoman Kathy Tramontana. He then defeated Robbinsville Mayor Dave Fried for a full term in 2008.  He took on a second term last year, running unopposed.

Maria Bua of Ewing, who serves as second vice chairwoman of the committee, will take over on an interim basis.  Sources have said Fried and Bua are the front-runners to succeed Wesley on a permanent basis and there has been talk that the two could share the chairmanship.

“I wish Roy well,” Fried said. “I think this is good for the party.  We can now all focus on moving the county forward and begin talking about the issues affecting taxpayers across Mercer County. I am always happy to serve wherever I can, but I think the important thing right now is that we follow the process and focus on November.”

The full text of Wesley’s farewell remarks is below.

I am sorry to inform you that I am resigning as Mercer County Republican Committee chairman effective February 1, 2011.  I do so with some regret, but given the differences between some members of the county’s leadership team and me, there is really no way that I can continue to lead the county organization effectively.

Over the past three and three-quarters years, you and I have taken the first steps to reestablishing an effective Republican organization in Mercer County.  Let me take a few moments to review them with you, as well as dispel some misinformation regarding what was done at the county level, especially with regard to raising money.

Under the leadership of Nancy Wesley, the Mercer County Capital Republican Club has not only provided a way for Republicans to meet and exchange ideas at receptions three times a year, it has provided the financial support needed for us to reopen our county headquarters in Hamilton, which served as the campaign headquarters in Mercer County for John McCain’s presidential campaign in 2008 and Chris Christie’s successful gubernatorial campaign in 2009, as well as support a number of county and state campaigns including races for county clerk, freeholder and state assembly over the past several years.  Today, the club has over 250 members, a significant increase from the 32 members it had when she took it over with me in 2006.

Since 2007, when I was first elected chairman by the executive committee, $138,696, according to our treasurer, has been raised by the Capital Republican Club, which was used to set up and pay for the county headquarters, cover the Capital Club’s three annual social events, our general operating expenses for our election eve rallies, election day victory parties, our county committee meetings and nominating conventions and over 460 broadcast emails supporting our candidates and our county and municipal campaign and fundraising activities, provide cash incentive bonuses awards to municipalities that had provided active support for the Capital Republican Club and pay off several longstanding debts including the remaining one from the 2003 county executive campaign.  It allowed us to provide our headquarters free of charge to all of the campaigns using it including the John McCain presidential, Chris Christie gubernatorial, Mercer County clerk and freeholder and 14th legislative district assembly campaigns.  This is a major in kind financial contribution to these campaigns, which we all can be justly proud of making.

We have also been very fortunate to have an extremely capable treasurer, Al Corson, to manage our accounts. I am also proud to say that we have not incurred any new debt, since I took office in 2007.  In fact, we  have paid off all but one of the county committee’s debts incurred in the years prior to my election as chairman.

Together, we have provided the organizational structure needed to rebuild the Republican party here in Mercer County.  To all of you who have worked with me to further this objective, I thank you, and I will never forget you. In a short period of time, we have raised over $218,000 used to reestablish our party in Mercer County and help our candidates.  Considering the state of our economy here in New Jersey, that is not bad!  And, when you consider that we have no elected officials at the county level and no special help from elected officials at the local level to raise that money, we have done very well, indeed!  We have educated our candidates and volunteers to be more effective on the campaign trail, and we have come together at both meetings and Capital Club events to celebrate victories and exchange ideas.  A lot has been accomplished, but a lot remains to be done.  It is now up to you to carry on the work that we began together a little less than four years ago. 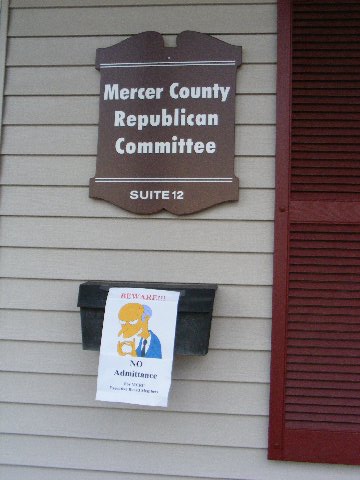