Former Demarest Mayor Jim Carroll, who was ousted as chairman of the Bergen Freeholder board in November, said he’s vying hard to replace BCDO Chairman Michael Kasparian when he steps down in March.

“I’m there, babe,” Carroll told PolitickerNJ. “I just think that I bring a different style. I think because I have actually experienced the municipal level and the county level. I’ve been involved for so many years, I know everybody involved and know how to get them involved.”

He said he’s been courting committee votes and has spoken to the other two candidates high on insider lists: John Hogan, who also was bounced as freeholder last year, and Louis Stellato, former mayor of Lyndhurst.

Carroll and Hogan are friends who bring relatively the same voter base to the table; Carroll said they’ve agreed Hogan would step back this time.

Stellato has been going back and forth on a challenge of state Sen. Paul Sarlo (D-Wood-Ridge) in the June primary, and sources said allowing Stellato to become party chair would alleviate any uncertainty for Sarlo.

But Stellato is a bit too much of a hothead, those sources said, to navigate Big Bergen and its countless party personalities.

“I met with Lou,” Carroll said. “I think there’s a place at the table for him.”

Another person who could make a push is Assemblywoman Valerie Vainieri Huttle (D-Englewood), whose husband Frank is the mayor of Englewood.

But as one source put it, she’d be “self-ordain(ing)” herself – her support is limited in-county.

“We as Democrats need to have a meeting and an open process to find out who will be the next Democratic chair in Bergen is,” Huttle said. “I don’t think there’s any frontrunner right now.”

“I do think we need to take this party in a new direction,” she said, not exactly radiating the exuberance of a potential candidate. “We need to look at a candidate with a whole host of strengths. I would have to weigh my responsibilities of being an elected official and, at this time, that may be a difficult balance.”

Could her husband – who has some top-end statewide support among Democrats – be the pick then?

“He’s got his hands full in Englewood,” she said.

The affable Carroll is seen as the easiest consensus pick, except state Sen. Loretta Weinberg (D-Teaneck) has a deep aversion to the Joe Ferriero-aligned Carroll.

Many expect Weinberg to put forth another name, although she was not immediately available for comment.

“Things have to change,” Carroll said. “The way we do business has to change. The game has changed.” 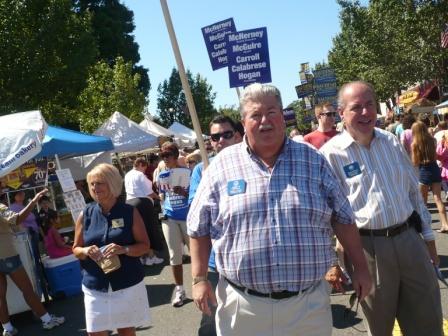