Gov. Chris Christie, pledging to deliver a balanced budget with no tax increases this year, called for pension reform, elimination of teacher tenure, more charter schools, and continued budget discipline in his State of the State address delivered Tuesday in the Assembly chamber of the Statehouse.

Saying that “now is the time to finish what we started last March,’’ Christie summarized last year’s budget-cutting measures and called for continued transformation of the way the state government conducts business.

In the field of education, Christie called for closing poor-performing schools if they cannot be improved, giving more power to principals, using merit pay for teachers, and using a merit system – not seniority – when layoffs are necessary.

Regarding pension reform, the second-year governor reiterated his position that reform is necessary if public employees are to be taken care of in retirement.

Stating that spending is down 9 percent over last year when the state was in danger of running out of cash, Christie said that “We are turning our state around.’’

Christie said that in order to hold the line on taxes in fiscal 2011-12, the state must control health-care and Medicaid costs, and continue to examine how municipal and school-aid programs are structured.

“I am asking for shared sacrifice in cutting what we don’t need so that we can invest in what we absolutely do need,’’ he said.

The Republican governor whose tactics have given him a national profile also thanked Democrats for working with him in the past year. “You know the debate has changed when my friends across the aisle propose legislation highlighting the need for tax cuts to stimulate economic growth,’’ he said.

In addition, Christie called for reforming and rolling back the taxes on businesses and residents. Stating that there have been 115 tax increases over the last decade, Christie also cautioned, “We will not put in place tax cuts that we can’t pay for.’’

“I am asking you to join me in cutting the popular in order to fund  the necessary.’’

Christie said that nearly 75 percent of the municipal and county budgets are driven by personnel and labor costs, and that without reform, pension and health-care benefit costs will increase by more than 40 percent over the next four years.

He said that without reform, the unfunded liability of the pension system will grow from $54 billion to $183 billion within 30 years.

“We now must put in the extra hours to ensure the system is solvent’’ for public workers such as teachers, firefighters and police officers.

He also said that if the reforms can take hold, the state must begin to make its pension contributions.

He said that New Jersey is one of 11 states whose pension funds will be out of money in nine years if there are no changes made.

Regarding education, he said there are more than 100,000 students trapped in 200 failing schools in New Jersey. “This awful situation is unacceptable in New Jersey,’’ he said.

He referenced Mark Zuckerberg’s 100 million gift to Newark to reform that city’s schools and said the state must expand the charter school network beyond the six approved this year and the 73 operating, and he called on the Legislature to pass the bipartisan opportunity scholarship act.

“We must end the myth that more money equals better achievement,’’ Christie said.  “We are running out of time.’’

“The time to eliminate teacher tenure is now,’’ he said.  “Teaching can no longer be the only profession where you have no rewards for excellence and no consequences for failure to perform.’’

Christie, in a speech interrupted 20 times by applause, said that the drastic measures he instituted in his first year of office have borne fruit. He said that the budget is balanced, state taxes are lower for the first time in 10 years, the jobless rate has begun to drop, and companies are starting to look at New Jersey again. 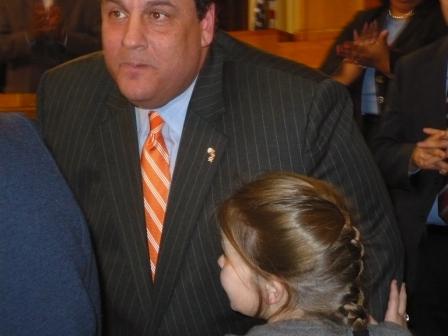