Gov.  Christie on Monday afternoon conditionally vetoed affordable housing legislation, saying it fails to reform how such housing is provided.

Christie said that the amended legislation that was shepherded through the Legislature by Democratic Sen. Raymond Lesniak would create a new bureaucracy and increase the burden on the state’s towns.

“If the goal of this legislation is to replace an already broken system for providing affordable housing with a common sense, predictable and achievable process, then this bill sorely misses the mark,” said  Christie.

Among other things, the original version of S-1 passed by the Senate in June 2010 called for the elimination of the Council on Affordable Housing; limiting state review of local housing laws; and protecting against so-called builder’s remedy lawsuits.

Christie said in a release that the newer version of the bill would require 10 percent of all housing in every town to be affordable; create a new entity to review housing plans; and offer no protection against the builder’s remedy lawsuits.

In addition, the amended law would require towns in the Highlands, Pinelands, Fort Monmouth and Meadowlands districts to have 15 to 20 percent of all new construction as affordable.

Of the veto, Lesniak said he thinks the bill can be saved.

“Great minds think alike,” he said in an email. “Since I believed the differences between the Senate and Assembly on S1 were more form than substance, I would hope we could forge an agreement with the Assembly and the Governor to concur with the (conditional veto) and to pass a “clean up” bill that would incorporate the assembly’s goals that were not included in the Senate version, which were, for the most part, a greater role for non-profit affordable housing builders in the use of affordable housing funds and more incentives for municipalities to use affordable housing trust fund dollars.”

The New Jersey League of Municipalities, which has lobbied hard against affordable housing policies as they are now written, applauded the governor for the veto.

“We thank and commend the Governor for his action today in issuing a conditional veto of S-1,” said league Executive Director Bill Dressel. “The governor’s action protects municipalities and taxpayers from unreasonable obligations, and is in the best interest of the state.”

Assembly Speaker Pro Tempore Jerry Green criticized the veto, arguing that the bill Christie backs was deemed unconstitutional by the Office of Legislative Services and would impose a 2.5 percent fee on businesses, whereas legislation Green backs passes constitutional muster and cuts the business fee to 1.5 percent.

“The governor has now made it clear that he supports unconstitutional legislation that imposes higher fees on New Jersey businesses,” Green stated in a release. 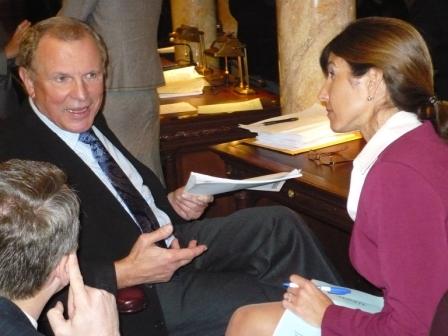