Shortly before Governor Christie’s “State of the State” address, legislative Democrats are set to gather at the Trenton Marriott to discuss in detail the upcoming redistricting process.

A Democratic source familiar with the plan told PolitickerNJ that State Chairman John Wisniewski will be giving a power point presentation updating the assembly and senate Democrats on the GOP’s mapmaking strategy and the experts Democrats have lined up to “rip through” the Republican gameplan.

“It’s funny, for the past year Kevin O’Toole has basically been telling anyone he can find how prepared the Republicans are on the map,” said the source.  “Meanwhile four Democratic staffers have been in (Washington) D.C. for the better part of the past year quietly plugging away on our map.  The Rs honestly have no idea what’s coming.”

Democrats say they are not planning to split Newark and Jersey City into three legislative districts as had been expected.   Those cities were split into three in the 2001 redistricting effort, but the court has since rules against “unpacking” of districts, so the two cities will likely be split into just two districts.

But Democrats say they are confident going into this year’s effort because the Republicans seem to be in some disarray.

“Over 62% of affiliated voters in New Jersey are still Democrats, Jay Webber was just fired, Republican leaders are pissed they were left off the Commission, and oh by the way Christie has infuriated the courts — today’s talk is all about ‘blue’ skies ahead,” the Democrat crowed.

Webber resigned abruptly as the chairman of the state GOP.  Webber and Gov. Chris Christie both maintain that Webber resigned but sources inside the party say their was a widening rift between the two men. Both have said the resignation was a result of Webber’s full plate and nothing more. Webber remains the chairman of the redistrciting committee.

Senate Minority Leader Tom Kean and Assembly Minority Leader Alex Decroce were both left off teh Republican redistricting committee leading to speculation that Christie wanted more of his inner circle represented.  Republicans deny there is any bad blood as a result of the decision to leave the two men off the committee and one source says they are still heavily involved in the process.

Republicans dismiss the Democrats swagger as nonsense and say they have the stronger team.  They are set to begin public hearings this week and their members are 100 percent united, a GOP source told PolitickerNJ.

“The Republicans the last two years have never been more united,” said one Republican familiar with the GOP strategy. “Of the five commission members there has never been a closer working relationship and there isn’t a ripple on the pond. Unlike the Democrats where there is infighting over the process, if we have to sacrifice Republicans to get control we’ll do it. If we have to give up a limb to keep the body politic alive we’ll do it.” 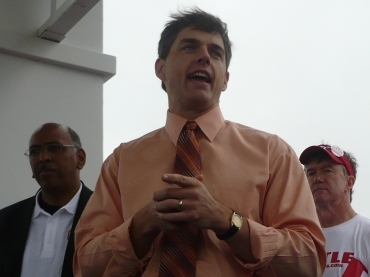