Up for re-election in 2012, President Barack Obama has an approval rating of 47% to 41% and U.S. Sen. Robert Menendez (D-Hoboken) polls “comfortably ahead” of Republicans who may oppose him, according to a poll released this morning by Fairleigh University’s PublicMind.

Guadagno trails the field with just 59% support among Republicans and “lean Republicans.”

“The fortunes of the president and Menendez are bound together,” said political scientist Peter Woolley, director of the poll. “They rode an anti-Republican tide into office. Republicans are hoping an anti-Democratic tide takes them away.  But in this state, Republicans will also need a candidate who can reach beyond Republican voters.”

Even though the president’s ratings aren’t upside down, the centerpiece of his legislative accomplishments, health care, comes out behind, according to the poll.

Fifty-two percent of those polled continue to say the country is on the wrong track, compared to just 35% who say it is headed in the right direction, a gap of 17 percentage points but an improvement from November’s 27-point difference and October’s 30-point gap.  The improvement comes despite that 40% say the U.S. military effort in Afghanistan is going well, but 47% say it is not going well.

Fairleigh Dickinson University PublicMind conducted the statewide poll of 802 registered voters by telephone using both landlines and cell phones from Jan. 3 through Jan. 9. The poll has a margin of error of +/-3.5 percentage points. 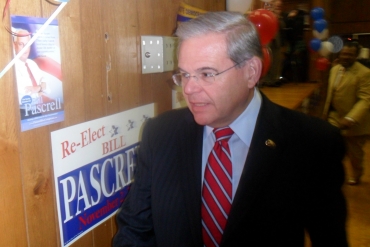