TRENTON – As questions surrounding the application questionnaire mounted, Republicans stayed the hearing on Ronald Gravino, the governor’s nominee to the N.J. Turnpike Authority and treasurer of the political organization Reform Jersey Now.

The hearing was getting heated just as the committee observed the 11 a.m. moment of silence for the Tucson shooting over the weekend.

As Chairman Nick Scutari (D-Linden) reconvened the meeting, he vaguely tied the hearing to the highly-speculated potential political motivations that have been discussed in the shooting of U.S. Rep. Gabrielle Giffords (D-AZ03). The speculation – by the media and others including Giffords’ father – on the politics of Giffords’ shooting have been highly criticized by some.

“You want to tie in the shootings to Reform Jersey Now? What you just did is despicable,” O’Toole said.

State Sen. Gerry Cardinale said RJN is being held to an unfair standard.

Gravino, in addition to excluding the RJN treasurer position from his resume, also omitted other political treasurer seats, like his representation for the Republican Leadership PAC.

“Were you the treasurer when it was fined (for failure to properly disclose contributions)?” state Sen. Paul Sarlo (D-Wood-Ridge) asked.

“Yes,” Gravino said, claiming a clerical error was the cause.

Sarlo listed the contractors who contributed to RJN, and asked Gravino is he was aware whether the companies did business for the N.J. Turnpike Authority.

Gravino seem to answer honestly, but never fully admitted knowledge of a firm that did work for the authority.

As Sarlo was running through the list, state Sen. Joe Kyrillos (R-Middletown) said to Sarlo off-microphone, but within earshot: “Does your company do any work on the turnpike?”

“I’m not the nominee,” Sarlo came back. “Joe, you’re making it personal.”

Sarlo later noted that his firm does do work on the turnpike, but that his company would never contribute to an organization like RJN.

O’Toole lampooned the whole process, “Mr. Gravino, are you a member of the Communist Party? Have you ever seen the movie Reds. Can you tell me (everything you have rented) from Blockbuster? Can you tell me every book you ever read?”

“I find the line of questioning to be ridiculous,” O’Toole said, and went on to ask Gravino about his background in highways.

As Cardinale recommended earlier in the day, the committee held the appointment and asked Gravino to fill out his questionnaire again.

The Democrats’ tactics did not sit well with the Republican members of the committee who issued a statement after the fact lambasting Scutari and company for singling out Gravino.

“Unfortunately, today’s hearing was used by some as a sideshow aimed at scoring political points on the Governor,” Sens. O’Toole, Kyrillos, Jennifer Beck, Kip Bateman and Cardinale said in a joint statement. “Unregulated political advocacy by non-profit organizations such as the Sierra Club, NJ Citizen Action, the League of Women Voters, and public employee unions have never been questioned or objected to by our Democrat colleagues. It seems their outrage is only inspired by those groups that hold different views than their own. Democrat calls for pay to play reform cannot be considered serious or credible unless they are willing to include public employee unions, the largest government contractors in New Jersey, in their plans.”

Sources said the nomination will be approved with two Democratic votes next time around, those being from state Sens. Brian Stack (D-Union City) and Sarlo. 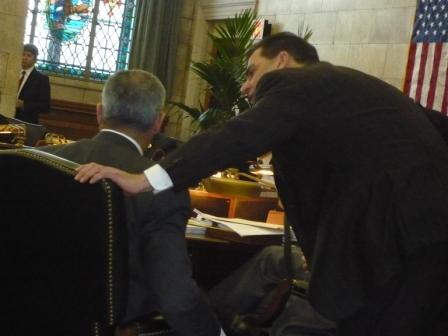