If Newark politics invariably spills onto the streets, Union County’s brand usually starts and ends – and sometimes never ends – with candidates in court, conferring with legal brains and draining resources in the process.

On Sunday, county sources said Smith was likely to resign today in connection with legal trouble.

Long buffeted by a local political war, Smith did not return repeated attempts to contact him, but one source close to the mayor in Roselle confirmed that while it remained a “fluid” situation late Sunday, Smith’s resignation was at hand. This morning, Smith sources said the mayor would not resign, however, and meant to prove his innocence and fight even if he has to endure an enervating legal battle.

At least two more Union County antagonists of the mayor’s told PolitickerNJ.com they had heard Smith was allegedly up against a Christmas Eve hit and run charge and subsequent faulty insurance claim and was preparing to leave office rather than absorb further punishment.

Political enemies in Smith’s party simultaneously happily amped up preparations of their own in a mayoral election year.

Law enforcement is right now zipped up on this.

Roselle Police Chief Gerard Orlando said his department was referring all calls on the matter to Union County Assistant Prosecutor James Tansey, who, when asked about the case, said, “I have no comment on that.”

Twice elected mayor as a maverick Democrat, Jersey City native Smith throughout his tenure as mayor of the small burgh on the fringes of Elizabeth battled with the Union County Democratic Organization helmed by Charlotte DeFilippo and allied with state Sen. Ray Lesniak (D-Elizabeth).

An ally of U.S. Rep. Donald Payne’s (D-Newark), Smith was one of a core group of independent leaders in Union County opposed to the DeFilippo/Lesniak power center. Smith’s political allies included Hillside Mayor Joe Menza, who won his first term in 2009, and Linden Mayor Richard Gerbounka, who squeaked out his second term last year.

In what would be – by all appearances – a seamless transition of power in Roselle from anti county establishment forces to formal organization control unless Smith reverses or summons an ally to run in his stead, Lesniak ally Councilman Holley firmly kicked off his candidacy with a press release this morning that landed amid Smith turbulence.

“The day-to-day operation of how borough government functions is shattered, and residents have lost confidence in the ability of current leadership to govern without bias,” Holley said in a statement. “Promises have been made, but the end result has been stagnation and delay. Residential property owners pay the bulk of taxes in Roselle. We have to create a fiscally strong government in order to position the borough for growth and stability. If we don’t change things soon, matters will only get worse.”

Charged in 2009 by the state Attorney General’s Office with illegally filling out a portion of the absentee ballots of voters in the 2006 Democratic primary for Borough Council, Holley subsequently entered into a pretrial intervention program. Formerly the chief of staff of former Assemblyman Neil Cohen, Holley last year trounced a challenger backed by Smith.

Since last year, Holley has served as president of the public affairs firm Front Porch Strategies in Caldwell.

“You know best what your business does and how its array of goods and services can benefit local municipalities and their residents,” reads the mission statement on the Front Porch website. “None of this means anything if you can’t get through the door to meet the elected or appointed officials who often make the decisions. We will walk you through the door.”

At Holley’s re-election kickoff last year, Lesniak told a packed house, “A vote for Jamel is also a vote for the next Mayor of Roselle.” 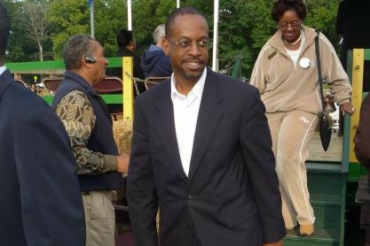