The committee spent their morning holding Gravino’s feet to the flames over his position as treasurer of shadow PAC Reform Jersey Now.

This afternoon, the committee gave him another once-over before yielding to Christie’s nomination, with GOP stalwarts state Sens. Joe Kyrillos (R-Middeltown) and Kevin O’Toole (R-Cedar Grove) casting ayes and Minority Leader Tom Kean (R-Westfield) watching the proceedings from the sideline.

State Sen. Loretta Weinberg (D-Teaneck) asked Gravino to convey her wishes to see a list of expenditures from RJN, to which he agreed.

She also asked if his consulting firm – which listed political consulting on the website – was still active, and he said it was.

Smith said he was given a good report on Gravino from his mayor, but still was critical of the partisan organization he was part of. Possibly, he said, Gravino was nothing more than a “partisan bean-counter.”

Gill voted against Gravino, “Not (for) the fact that (RJN is) partisan, but the fact that they do business with the authority on which you’re recommended.” 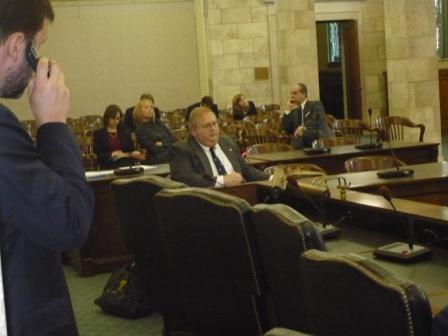