January 14th, 2010: Rivera-Soto Says He’ll Abstain Only When The Court Is Divided Due To The ‘Voices’ In His Head

Justice Roberto Rivera-Soto has modified his pledge to abstain from voting on opinions in protest of Appellate Division Judge Edwin Stern’s temporary assignment to the state Supreme Court.

What has made him change his position on the issue?

“…a particularly sober, thoughtful, measured and ultimately persuasive analysis stands out, a voice that has triggered additional reflection on the course I earlier charted,” explained Justice Rivera-Soto.  So, it was the ‘voice’ in his head that made him change his mind.

“Actually, there were seven voices. And the vote was 4-2, with one abstention,” continued the Justice who was nominated by Governor James E. McGreevey in 2004.

Henceforth, he’ll only abstain when and if Stern’s vote makes a difference. Essentially, when the Court is divided — he said Wednesday in a dissenting opinion in a land use case, Hopewell Valley Citizens Group v. Berwind Property Group Development Co.

“Also, when we are in a month with a R in it. And when there is a full-moon, and when a horse named for a Shakespearean character wins the third race at Monmouth Park,” added Rivera-Soto.

“When a justice’s decision is based on hearing voices, it’s time to go,” said state Senate President Stephen Sweeney, “Although I do understand the voice in his head that abstained.”

Sen. Dick Codey added, “I must admit I underestimated Justice Rivera-Soto.  I thought he could not make his tenure on the court any more bizarre or shameful.  Today he proved me wrong…”

In related news, Rivera-Soto decided that he won’t seek renomination, and said in a statement to Governor Christie, “Although the rewards of public service and, in particular, service on the court are many, it is time for me to return to my first and true professional love: the practice of law.” 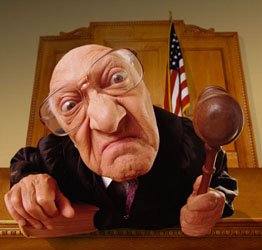