TRENTON – Horse-trading appointments is becoming cumbersome, said some Republican sources in the Statehouse this week, but Democrats are claiming it’s the governor complicating the trade-off negotiations.

This chafing is the backdrop for the Senate Judiciary Committee hearing today, although the highest-profile nominee, David Samson, was given rave reviews from both parties.

Sources said the Dems traded Gravino’s approval for a push-through on several judges, including one very close to South Jersey powerbroker George Norcross III, Superior Court Judge Frederick Schuck. But Christie only noticed his intent to nominate Schuck and fellow Superior Court Judge Heidi Currier after the Gravino vote – which is simply procedural – but held back his actual nomination until this morning.

Today, sources said Christie released the judge nominations after he was assured the Highlands nominees would get a vote before the board. One source said state Sen. President Steve Sweeney (D-West Deptford), a close ally of Norcross, arranged to have the Highlands nominees appear on the agenda today without clearing it with Chairman Nicholas Scutari, though.

Schuck, as well as fellow judges Currier, Angela Borkowski, Linda Grasso Jones and Leslie-Ann Justus, were all approved by the board as their first order of business.

After clearing some interviewed nominees – like Grace Hanlon, nominated for director of the Division of Travel and Tourism – the Democrats pulled the Highlands nominees and a few others out of a non-interviewed consent vote.

State Sen. Loretta Weinberg (D-Teaneck) requested the Highlands nominees be considered separately, the same as Russell Hewit and John Kelly, both nominated by the governor to the Horizon Blue Cross and Blue Shield Board of Trustees.

Weinberg said Kelly submitted for an interview while Hewitt did not. “This is an extremely important board, insurers of the largest population in the state of New Jersey,” Weinberg said. She approved Kelly, but deemed a vote on Hewit’s appointment “inappropriate” given his unavailability for questioning.

State Sen. Jennifer Beck (R-Red Bank) agreed, but cast her lot with the rest of the committee – excluding Weinberg – in approving both men. “I still would prefer to interview for this position,” Beck noted.

After the Horizon board vote – up against a 2 p.m. scheduled Senate session and missing a noon caucus – Scutari said the board will consider the remaining nominees on Monday. “These are people nominated for months, nearly a year,” argued state Se. Joe Kyrillos (R-Middletown). “We’re going to make them wait again?”

Some of the nominees were in the room from 9:30 until a 1:15 dismissal for no good reason, he said.

The appointments being held are Richard Vohden and Samuel Race to the Highlands Water Protection and Planning Council; George Kolber and George Castro to the N.J. Sports and Exposition Authority; David Steiner to the Port Authority; Thomas Richard Calcagni as the director of the Division of Consumer Affairs; and Charles ‘Chip’ Stapleton to the N.J. Maritime Pilot and Docking Pilot Commission.

The consent appointments affirmed by the committee were: Nelson Ferreira to the N.J. Transportation Trust Fund Authority; John Bonanni and John Eskilson to the N.J. Public Employment Relations Commission; James Gorman, Robert Lucky, and Michael Pane to the Fort Monmouth Economic Revitalization Authority; Eric Hector Jaso to the N.J. Urban Enterprise Zone Authority; Mary-Grace Cangemi and Douglas Katich to the N.J. State Council on the Arts; Gary Dahms to the N.J.I.T. University Board of Trustees; Vijayant Pawar to the N.J. City University Board of Trustees; and David Allen to the State Board of Chiropractic Examiners. In a separate vote they approved three county tax board nominees: Kathleen Cody Bjelka (Monmouth); Darryl Malcolm (Warren); and Joan Bedrin Murray (Morris). 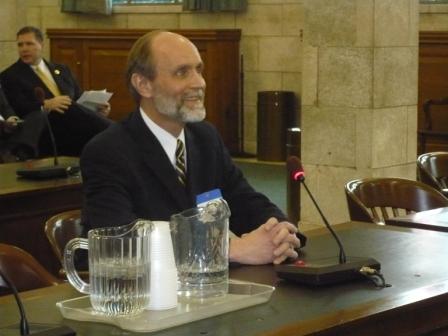