Mitt Romney and Mike Huckabee lock up in first place at 18 points apiece among prospective GOP Presidential candidates in New Jersey, according to a North Carolina-based polling company.

But don’t expect Peter Kane of Summit, New Jersey state director of the 2008 Huckabee campaign, to try to muscle Romney’s Garden State allies, who happen to be cozy with tough-guy Gov. Chris Christie.

Asked today about yesterday’s poll, two days after Romney visited Christie at the gov’s mansion and a few months removed from an ironclad phone call from Christie’s political people to party chairpeople to stay out of Prez politics, Kane tread carefully.

“While I was pleased by the results of this recent poll I was not surprised by Mike Huckabee’s popularity among Republicans here in New Jersey,” the former Huckabee state director told PolitickerNJ.com. “In fact, what it clearly shows is that New Jersey Republicans in 2011 know that the most effective voice for our party in next year’s Presidential race will be that of a chief executive who has a track record of change and of upending the ‘because we’ve always done it this way’ mentality. Sounds like someone else we know ….”
Christie?
Romney??
“No comment,” said Kane. 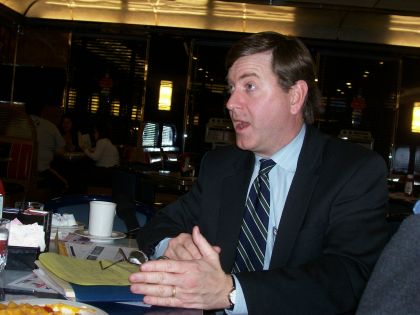