Mercer County Republicans Thursday took the next step in the drive to oust Chairman Roy Wesley, amending the party’s constitution to allow for the replacement of the chairman.

The motion to amend the constitution passed with a two-thirds majority.  The party’s executive committee must now call another meeting of the full body in order to vote to remove Wesley.

Wesley has said repeatedly that he has no plans to resign the post before his term ends next year.

Wesley has been targeted for removal since the November elections when the party’s showing was less than stellar, results that included the loss of the 14th District Senate seat, which had been held by the GOP for two decades.

“This was not a meeting about the change to the constitution so much as a meeting designed to attack me and get me out,” he said.  “It was either personal attacks or patronizing comments and very little discussion about the amendment itself.”

Wesley said he is weighing his options, but his inclination is to force a vote on his removal.  He says he has not yet had his “day in court” where he can present his side.  So far, he said, the situation has been full of attacks and nastiness and very little substance.

“This has always been about gettng me to resign,” Wesley said, adding that regardless of the situation, the party must follow its own rules.

Former 12th District Congressional Candidate Scott Sipprelle of Princeton and Robbinsville Mayor David Fried have led the charge to replace Wesley, he said, telling the chairman and other party members that Wesley has not produced results.

In November several members of the party signed a “no-confidence letter” reportedly written by Sipprelle, which accused Wesley of failing to adequately support Republican candidates for office.  The letter also criticized Wesley for “insufficient fund-raising relative to the requirements necessary to fund competitive campaigns for county-wide office” and for the chairman’s handling of a lawsuit filed by a prominent pollster seeking payment of overdue fees.

According to party insiders, several other prominent Republicans have asked Wesley to step down, including Mayors John Bencivengo of Hamilton and former Chairman John Hansbury.

The spat turned nasty last month when unknown members of the anti-Wesley faction posted a sign outside a party fundraising event asking members to call Wesley and demand his resignation.  The sign included his cell phone number.  At the time, Wesley called the move childish. 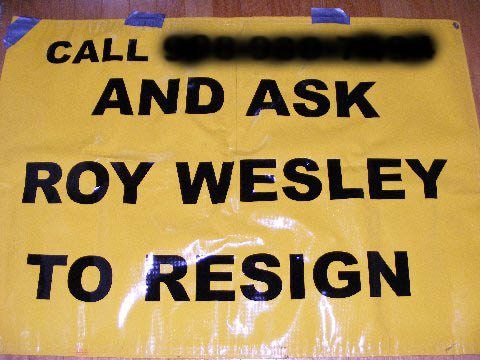