Eleven of New Jersey’s 21 counties employ a superintendent of elections, but some of them could be out of a job if a Senate bill moves forward.

The bill has been hanging around for years without much support, but state Sen. Donald Norcross (D-Camden) is resurrecting it.

It comes down to efficiency and cost savings, he said today, plus the option to eliminate the superintendent is in the hands of the county elected officials.

Some election officials in other parts of the state told PolitickerNJ they don’t see the need for change – and that the checks and balances of the election process could be harmed.

“I don’t think it would be saving everybody money,” said Monmouth County Superintendent of Elections Hedra Siskel. “You still need the employees.”

The bill, S2455, which will be considered in the Senate State Government, Wagering, Tourism, and Historic Preservation Committee on Monday, “permits abolition of offices of superintendent or deputy superintendent of elections, or both; transfers powers and duties thereof to county commissioner of registration or county board of elections.”

In 11 counties, the superintendents work closely with the county clerk and Boards of Elections to carry out the polling processes each election cycle.

Many believe the triangulation of the duties allows for a system of checks and balances, but in many less-populated counties, the operations continue seamlessly without a superintendent.

“This will save the taxpayers money,” he said, without endangering the fair and well-monitored election process.

“I don’t think anyone has suggested that the superintendent is a check and balance for the Board of Elections,” he added. “It’s not like the legislative, executive, and judicial branches.”

“I don’t know what Sen. Norcross’ thing is,” said Siskel, who spent years on the Board of Elections in Monmouth before becoming superintendent. “I’m confused.”

“It’s a check and balance situation,” she said. “I was in the Board of Elections. We do provide checks. You may gain some dollars, but I don’t think that the savings are worth it. But that’s just my opinion.”

According to the proposed law, if a county board of freeholders decides to eliminate the position, it must do so for a 10 year period, minimum.

Norcross said Camden County is likely the first place the law would be used.

Camden County Board of Elections Chairman Robert Venuti said the board is ready and waiting for the added responsibility.

“Sure the board of elections can handle it,” said Venturi, a Republican who has long been a part of the election process in Camden County.

“We could take that over tomorrow. We would have to take over some of the (superintendent’s) employees,” he said. “We couldn’t handle it all,” as presently constituted.

Venuti and the Camden County Board of Elections handled the heft of the poll work until 1990, when the county created the position of superintendent.

“I was the only one that went before the freeholder board (to oppose it),” he said. “It would double the cost of elections, I told them. We were already handling everything.”

But doesn’t having a superintendent improve the checks and balances?

“That’s almost a quarter of a million dollars,” he said.

Election superintendents are nominated by the governor and approved by the state Senate. Similar to how election boards prohibit single party rule – another form of check and balance – superintendents and their deputies must be from separate parties.

“Camden County, we do everything by the book,” Venuti said. “Most of the counties are using our training manuals.”

In Camden, the board engages third-year law students who observe the polling locations.

“That has cut down any sort of problems in the city of Camden,” he said.

But election officials point out that the majority of irregularities – which the superintendent of elections is charged with examining – occur on paper ballots, like mail-in and provisional votes, not on the machines.

Bergen County Superintendent of Elections Patricia DiCostanzo deals with the largest population in the state, which translates into the highest vote totals and broadest range of irregularities.

“There’s checks and balances,” she said today. “There’s no overlapping of work (in Bergen County).”

“I do the machines and the voter registration and any type of irregularities,” she said. The clerk does the sample ballots and the board oversees the poll workers and collection of ballots.

“We got a three-way check going on here,” she said, and sniffing out irregular ballots is an important part of the process best kept separate from the board members.

She used techniques that have changed through the years to find the bad ballots. “They got smart,” she said of the people pulling ballot box shenanigans.

“Now I have a handwriting expert,” she said, and recently the board rejected 179 absentee ballots found by the superintendent to have three or four different handwritings on them.

She was chairwoman of the Board of Elections, where she served for nine years.

“It would be huge,” she said of the bill’s impact on elections in Bergen.

Another point DiCostanzo makes is that when a superintendent is hired, it currently takes bipartisan approval with a Republican governor and a Democratic Senate.

But some freeholder boards who will vote on the elimination of the position could be from one county – as is the case in Camden.

“To keep the politics out of it, I don’t think it’s a healthy thing to do,” she said.

Venuti said his board does the same sort of scanning for irregularities.

“We absolutely check the signatures,” he said. “I’m not a handwriting expert. I did take a course with the FBI a few years ago.”

Norcross isn’t finding much support yet in the legislature. His Camden County ally, Assemblyman Lou Greenwald (D-Voorhees), is sponsoring the Assembly bill, but neither has any co-sponsors.

“It died a slow de
ath (in the last session),” Norcross said, but in this economic climate, he still sees it as a way for counties to save money and streamline their election process.

He’s considering committee amendments for next week, including looking at how and when the position abolishment can take place.

“We’ll move it through,” he said. “This is about saving the taxpayers money and creating efficiencies.”

One state election official said of eliminating the source’s county superintendent, “I don’t see it happening here any time in the future. But, if it was a real pain-in-the-ass superintendent, you’d probably get a different line out of me.” 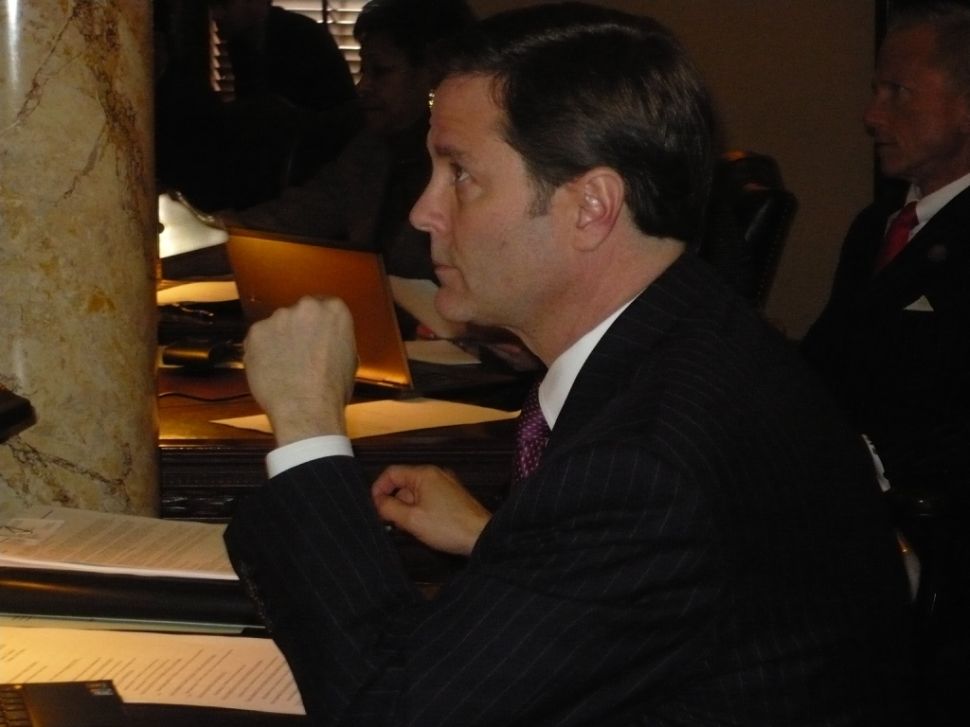