On their way out of One Bergen Plaza, the Democrats warehoused documents, stocked boards, inked deals, and even bought an amphitheatre – doubling and tripling the consternation of the new GOP majority.

So much so that, at her swearing-in ceremony, when incoming County Executive Kathe Donovan announced that she would fight the lame duck blitzkrieg, the crowd nearly rose to their feet in ovation. And Donovan has the new Republican freeholders along for the crusade.

“We were not asked our opinions on anything until the decision was already made. We saw no resumes,” said holdover Republican Freeholder Rob Hermansen. “I let it go, I let it slide. I told (former Freeholder Chairman Jim Carroll) that I was unhappy.”

Even though Hermansen is much more aligned with Donovan than with the incoming majority of John Felice, John Mitchell, and Maura DeNicola, all the Republicans can agree that the Democrats undermined the will of the voters who sent them packing with their lame duck moves.

“They’re trying to cling to power,” said GOP county chairman Bob Yudin, who guided the new majority to victory alongside Donovan. “Even though they lost the election, (the Democrats) still think they’re in charge,”

Party insiders like Dumont Mayor Matt McHale, the new executive director of the Bergen County Improvement Authority, and former aide to Democratic Freeholder Bernadette McPherson, Jennifer Holdsworth Kleinman, clerk to the freeholder board, were inked to deals that the Republicans now target.

“This is just one of the hundred (appointments) the Republicans (are fighting),” Yudin said. “(Kleinman) was one of those lame duck appointments.”

But while their electorate applauds the fight, surely the voters or Bergen County aren’t looking to pay attorney fees in order to get the fight. Unfortunately that is the outlook for one of the appointments.

Freeholders have little power to appoint positions, Democratic Freeholder David Ganz told PolitickerNJ, but the board clerk and, oddly, the fire marshal are a few.

Kleinman was operating for six months under the Democratic regime as an acting clerk to the board, although the board majority was more than pleased with her work and could have offered her a three-year contract; annual salary $75,000.

But Kleinman said today a long-term contract wouldn’t have been fair; what she and the outgoing Democratic majority decided would be fair is a contract covering the six months past and extending to Dec. 31, 2011.

“I have an excellent working relationship with the new Republican Freeholder chair (John Driscoll),” she said, without a lick of the true-blue fervor that was cultivated under former Democratic party boss, Joe Ferriero.

Nonetheless, she’s being fired tomorrow, according to agenda documents for the freeholder board meeting.

“I was notified by board counsel,” she said. “It is a complete disappointment.”

Yudin had a different take. “This is the Democrats trying to ram down the throats of a Republican administration their clerk to the board,” he said. “The Republicans are allowed to have people in their administration that they feel confident in.”

Unfortunately for the taxpayers, it might not be that easy.

“I have retained counsel,” Kleinman said, Craig Gumpel of Fox & Fox, but she is still optimistic the will of the board might change in the next 24 hours. “I want to continue doing the job.”

Ferriero was a notoriously heavy-handed party chair whose machine politics playbook was dog-eared and coffee-stained by the time he stepped down under investigation.

Remnants of voter outrage over his patronage and partisanship operation helped push the Republicans into power over the past two years, according to Bergen insiders.

But Democratic sources said Ferriero would never have been so bold to replace a qualified partisan professional with an unqualified partisan layperson, a situation that seems to be emerging with the still green GOP board.

At a board meeting tomorrow night, the Republicans have queued up two resolutions: one to rescind Kleinman’s contract because they believe it to be unlawful, and another replacing her with Karen Mastriano, a Saddle River councilwoman who served as volunteer coordinator for the GOP freeholder campaign.

“That (Kleinman) contract is unlawful,” Yudin said, and the board attorney will argue the same tomorrow. “They had no legal right to give that contract.”

Ganz was on the board at the time and couldn’t disagree more.

“I won’t argue or quibble with the fact that we have a system in American politics,” Ganz said, one that predates President John Adams, who himself triggered the Marbury vs. Madison court case by signing appointment papers after his term in office expired.

The American system: “To the winner go the spoils,” Ganz said.

But Adams’ appointments were upheld and Ganz believes the Kleinman appointment will stand up equally in court.

According to administrative code 40:20-26 and 40:41A-41, said Ganz, an attorney, the appointment is completely legal. “This (clerk position) is a little bit different than certain other things in the government.”

The first citation notes that the hiring of a board clerk “shall be for a term of three years,” while the latter allows for employment at the “pleasure of the board,” or for a term of up to three years.

Fighting the appointment on the first grounds – that the term isn’t three years, it’s one and a half – could backfire.

“They could find themselves in an anomalous situation where they’re stuck with a clerk for three years instead of one,” Ganz said.

To further his legal argument, he even cited the state statute: one- to three-year term for freeholder clerks.

So the question then turns to who is more qualified on their own merits, Kleinman or Mastriano? Mike Gartland of The Record obtained the resumes of both candidates, which were independently verified.

Kleinman has a law degree from Seton Hall with legislative aide, congressional aide, and law clerk experience, as well as numerous other bright spots on her resume, like two terms as student government president at Rowan University.

“(Mastriano) was a very hard worker (on the campaign),” Yudin said. “She’s qualified up and down for this kind of a position.”

Ganz said, “If you weigh the resumes side by side, there is no comparison.”

Felice, who worked closely with Mastriano on the campaign, said he cannot comment on her qualifications or the yet-to-be-voted-on hiring because there is the potential for litigation on the outcome.

When asked if that would stop him from casting his vote tomorrow, he said, “Oh, no.”

Driscoll also declined comment on Mastriano’s qualifications, but he stood up for the GOP’s endeavors, in general.

Tomorrow the board will also vote to overturn bonding for a concert venue buyout and an investigation into another lame duck appointment. “I am behind the agenda,” he said, including the clerk swap.

But the fact that a lawsuit is dangling should raise some red flags, according to Ganz. “The fears that they are expressing (about potential litigation) are warranted,” he said.

There have been no complaints to his knowledge about Kleinman’s work – everyone who spoke to PolitickerNJ was complimentary of her work – and, therefore, there is no basis to end her contract with the county.

“Having said all that, I don’t think (the Republicans) care,” he said. “The action that they are about to take is purely political. I believe the (scheduled) vote to be unlawful and I believe anyone who participates leaves themselves open to potential liability.”

Driscoll gave a half-hearted reply to the criticisms. “People are upset (about the board clerk) and there is nothing we can do about it.”

Not exactly the opinion of Hermansen. “People are entitled to ask the questions and we have to give the answers,” he said. “There are some things there that we’ll have to explain better. These are things that (Driscoll will) have to explain more than I will.”

Hermansen was quick to chide the Dems for their non-collaborative, borderline secretive approach in December. Now those same criticisms could apply to the Mastiano appointment.

Being in the majority, did Hermansen have any input on the hiring of the clerk, the board’s main administrative interface?

“I did, afterwards. Yeah, I saw the resume of the person I was told was being hired,” he said. “They come to me afterwards and asked me, what do I think. I have seen two resumes. I am not sure how the individual who we’re looking at right now – how her name came to the top of the pile.”

“We have to be more open and transparent,” he said. “We were elected to do something different and better. I think we’re getting better. I just think (in this instance), it could be better. You can always do things better.”

Driscoll said things are better; the Democrats never released the resumes of some of their appointments last year.

“We’re being open and transparent,” he said. “This is who we are. These are our people.” 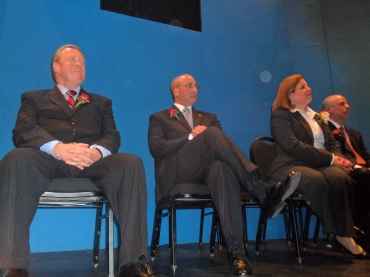