He barks an expletive, then groans into his cellphone about campaign dollars.

It is gut-level campaign misery, and yet Fonseca – in his best attempt to highlight the positive – grits through the joyful hugs celebrating his boss’s victory- trying to squeeze out a convincing grin.

But the damage done preludes the second knee to the groin Team Booker sustains that night in 2010 when Central Ward Councilman Charles Bell can’t get by challenger Darrin Sharif, setting up an unraveling of Booker’s budget plans.

In a Newark swamp of gang violence, xenophobia, glory, murder and urban squalor, politics undergirds the second season of Brick City, which begins with Gov. Jon Corzine campaigning alongside Mayor Cory Booker en route to losing his re-election bid, and climaxes when the mayor weathers his own 2010 re-election.

The first season chronicled Booker’s exhilaration with the victory of President Barack Obama even as his Central Ward candidate lost, symbolizing the inevitable impact of local politics.

This second season dives headlong into the hard edges of Newark’s five wards, featuring not just Captain Kirk on the bridge of the Enterprise – as the first season tended to project at its worst moments on its way to bagging a Peabody Award – but also Booker’s own inner Smerdyakov as he grapples like a castaway son to connect with his beleaguered and resistant city.

Even better, though, is the series’ willingness to film Booker’s antagonists – most notably Ras Baraka –  as more than cardboard cut-outs. Baraka has his own story here, fleshed out in scenes with his poet father and in bullhorn warzone mode, positioned with almost doppelganger precision opposite Booker.

We even get former Mayor Sharpe James at a church in Irvington when he gets out of the can.

If you like New Jersey political characters, you get a steady diet of them through the course of the series’ six episodes, including Gov. Chris Christie, Essex County Executive Joe DiVincenzo, West Ward Councilman Ron Rice, veteran South Ward operative Carl Sharif, and Baraka.

Bad-mouthed on the streets as Elmer Gantry from Oxford – the ultimate outsider to the city’s riven streets – Booker stands on the Prudential Center sidelines of Christie’s 2009 victory over Corzine looking like an uneasy interloper.

“We’re out here because we’re dying, because our babies are being killed, and because there is no comprehensive plan that the city has to protect the people of this town. Until our demands are met, we will continue to occupy these streets.” 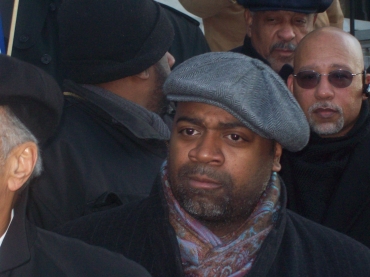