WASHINGTON D.C. – The crowd of lobbyists, elected officals and hangers-on staggers drunkenly toward the Metro station, rides underground to Woodley Park and surfaces at the hotel.

Inside, Senate President Steve Sweeney (D-West Deptford) stands at the end of a long, lava lamp-lit bar in the center of 2001 Space Odyssey decor.

“I drove down here to represent the Democratic Party as the Senate president,” he tells a gaggle of reporters.

Assemblyman John Amodeo (R-Margate) grabs Sweeney by the back of the neck at the bar.

“Come on, Steve, you’ve got to give the Democartic Party rebuttal at the dinner tonight,” he says.

Gov. Chris  Christie’s the main event at the 7 p.m. function here at the Marriott.

“I can’t do that, John,” says Sweeney. “That would be like Dean Martin and Jerry Lewis, but I’m not sure who is who.”

Amodeo evaporates in a growing crowd of pols dragging briefcases with wheels on them.

A few Democratic Party power players who drove down solo rather than endure the proletarian confines of the chamber train now stand elegantly at the bar as the crowd pours through the doors into the lobby.

Someone asks Sweeney about the capsized leadership of the Passaic Valley Sewerage Commission (PVSC) and he says, “You know, these guys.”

“Yes, the arrogance, they lose touch,” he says.

Sweeney walks into a growing crowd at the bar that now includes Christie bulldog Bill Palatucci.

“When the governor wants you gone, you gotta go,” he tells another insider, who bearhugs him.

“My guy’s still there,” says state Sen. Paul Sarlo (D-Wood-Ridge), referring to Democratic Party ally Ken Lucianin, the last surviving member of the commission save Calandriello. Sarlo’s here to have dinner with Sweeney – privately – rather than endure the Christie speech later.

“Maybe, maybe,” says spokesman Tony Sayegh, when asked if Gooch will pursue another run for Congress in the 6th District after losing last year to Tea Party darling Anna Little of Highlands.

Many in the room are alert to the movements of Palatucci, who radiates PolitickerNJ.com Power List number one status and then leaves. U.S. Rep. Frank Pallone (D-Long Branch) enters.

“Assemblyman Reed Gusciora says he will support it and, of course, the governor has said he will sign it,” says Singer, when asked about his legislation to reinstate the death penalty.

“Hello, Lou Greenwald,” sounds a voice in the bar, by way of introduction.

The assemblyman steps forward with a handshake. 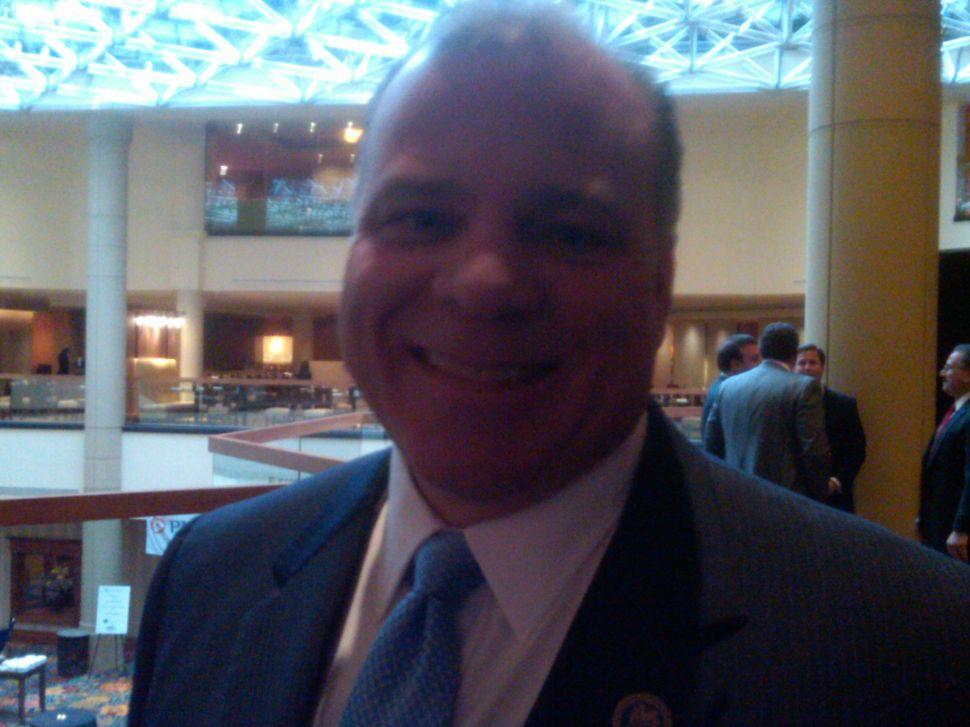