Given an object with Supreme Court Justice Roberto Rivera Soto’s decision to weigh in on cases after all, state Senate President Steve Sweeney (D-West Deptford) reiterated his call for the embattled justice to get it over with and resign.

Rivera-Soto took a drubbing in the media for deciding to asbtain from voting as a protest of Chief Justice Stuart Rabner’s decision to fill a vacancy on the court.

“If there was any lingering question that Rivera-Soto is unfit to serve and must leave the court immediately, it’s now been answered,” Sweeney said in a release. “When a justice’s decision is based on hearing voices, it’s time to go. I don’t know which is worse, Rivera-Soto’s original decision not to rule or today’s about-face. Neither is rooted in any solid ground of law, logic or common sense.”

Rivera-Soto wrote to Gov. Chris Christie last week, advising him of his decision not to seek reappointment at the end of the year. 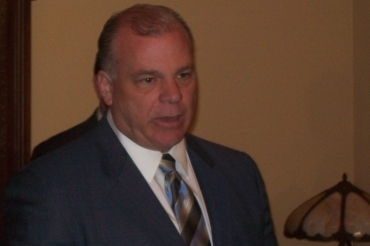