TRENTON – Ratepayers could get the shaft if a new deregulation bill continues to receive the support a Senate committee gave it today, according to warnings from the state’s Division of Rate Counsel.

The bill, S2664, the Market Competition and Consumer Choice Act, would alter state regulation of competitive services provided by telecommunications and cable TV companies. It is sponsored by state Sen. Raymond Lesniak (D-Elizabeth), who chairs the Senate Economic Growth Committee that reviewed the bill today.

“(T)here is no real choice for many consumers and competitive protections when it comes to terms and conditions of service,” said Stefanie Brand, director of the Division of Rate Counsel. “This bill would leave New Jersey’s residents at the mercy of cable and telephone companies with respect to these issues. It is a profound shift in consumer protection and it should not be undertaken without careful consideration and input from all interested constituencies.”

Among the protections removed, Brand said, are the state enforcements for providing safe, adequate, and proper service; freedom from unreasonable discrimination in rates or undue preferences in service; protection from “slamming;” correction of bill errors; and credit for outages.

Dennis Bone, president of Verizon New Jersey, spoke in favor of the bill, and was called back up to respond to the issues Brand raised.

After investing $3 billion in the FiOS fiber optic initiative, he said the last thing the company wants to do is scare off customers.

“A lot of the regulation on the books has nothing to do with customer satisfaction,” Bone said.

He said policing of the telecommunications industry is already duplicative. For instance, he said when Verizon was accused of deceptive business practices in 2006 both the Attorney General’s office and the Board of Public Utilities investigated the claims reported to the Department of Consumer Affairs.

Verizon settled and paid $795,000 to the state in civil penalties, attorneys’ fees, and investigative costs. The company also provided a $50 gift card to the 1,160 customers who lodged complaints and allowed them to cancel FiOS without early termination fees.

Today, the Rate Counsel also questioned whether future build-out of the company to reach more of the state’s customers – beyond the build-out already contractually required – would be undertaken without state regulation. Bone confirmed all contracted expansion would continue, but would not comment on any future build-out.

Another backer of the bill, Phil Beachem is president of the New Jersey Alliance for Action, a non-profit, non-partisan statewide coalition that advocates for state infrastructure investment.

“(This is) one of the single most important pieces of economic growth legislation in Trenton,” he said.

Considering the double-digit unemployment rates in the building trades, Beachem said the telecom companies are now giants in state investment and employment. “It’s bigger than pharma,” he said.

The New Jersey league of Municipalities asked the committee to postpone voting on the measure until a fiscal statement is complete to determine the cost of deregulation.

The bill passed unanimously, 6-0, and was released from committee with amendments.

An interesting back-and-forth emerged from the meeting as two top-shelf lawmakers vied for credit from Bone on the 2006 telecom reform that allowed providers to obtain state franchises for video services rather than going to each individual municipality. Verizon bagged the first statewide franchise and hasn’t looked back since.

State Sen. Richard Codey (D-Roseland) made note that he signed the bill into law while serving as Acting Governor, and Bone gave him his due.

Then Lesniak asked Bone to remind him who the sponsor of the bill was, to which Bone replied it was the good Senator from Elizabeth.

The laughter quickly turned to murmurs when state Sen. Robert Singer (R-Lakewood) joined the joke. “Who got more money in their PAC?” he said. 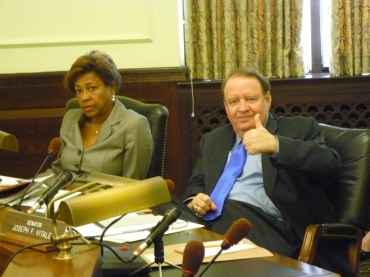