The mob is thriving on the New Jersey docks, according to the feds, or at least it was until Thursday when agents ran down a trail that allegedly included 15 New Jersey associates, a historic case that clashes mightily with last September’s Senate testimony by a dockworker union president who said waterfront crime was as antiquated as a hook he held up as a prop.

That was Tom Leonardis, arrested yesterday among the International Longshoremen’s Association (ILA) reps from New Jersey and charged with extorting union members.

“Today’s RICO indictments are part of our long-term fight to rid the ports of New Jersey and New York of the stranglehold of organized crime,” said Marjorie Franzman, Special Agent in Charge for the New York Region of the U.S. Department of Labor’s Office of Inspector General, Office of Labor Racketeering and Fraud Investigations. “We will continue to work with our law enforcement partners to prevent the influence of organized crime over unions.”

State Sen. Ray Lesniak (D-Elizabeth) sponsored a controversial 2010 bill (backed publicly by Leonardis) – and hooked Assemblyman Gordon Johnson (D-Englewood) as a lower house sponsor – to remove the docks from the oversight of the Waterfront Commission and give that authority instead to the Port Authority of New York and New Jersey.

Lesniak stands by the legislation a day after the big bust, and again made the argument that his focus is oversight responsibility, which he believes would be more properly concentrated under the auspices of the Port Authority, not an ineffectual waterfront commission, he says.

“I just want better supervision,” said the veteran senator. “The Port Authority would make it a lot more efficient. I am developing a pattern of abuses from the waterfront commission and its impact on port businesses.”

The feds – not the commission – made Thursday’s arrests of 100-plus people in the Northeast area, which was 90 percent construction – not dockworker – labor, Lesniak said.

But Waterfront Commission Executive Director Walter Arsenault said, “we were involved from the beginning to the end.”

Politically active, the ILA over the years donated extensively to New Jersey Democrats in the Newark/Elizabeth area and beyond.

An alleged associate of the Genovese crime family, Cernadas Sr. was one of the 15 men arrested by the feds Thursday and charged with three counts of extortion and one count of RICO conspiracy, punishable all told by up to 80 years in prison, according to U.S. Attorney Fishman.

“The longshoremen have always been supportive and labor support is like corporate support – like Enron – the majority may be good but you find one that is infected,” Rice told PolitickerNJ, referring to the contributions from Cernadas and the ILA.

At a September hearing, Lesniak chalked the waterfront commission up to an anachronism and bemoaned the regulatory costs it imposes, prompting state Sen. Richard Codey (D-Roseland) to adopt a counter position that New Jersey specifically needs the commission to battle existing waterfront crime.

“You find out every day there’s another problem,” said Rice, reflecting on Lesniak’s efforts. “I’m not sure what his thought process was. It doesn’t make any sense. It’s obvious. I don’t think you remove oversight. We’re going to always receive contributions from unions and corporations but the reality is you have a responsibility to protect the public from those things and puts them in check rather than put legislation in that waters it down.

“These things exist,” the senator added. “I’m not surprised if they came back and said we have similar problems with casinos. Where big money is is where organized crime works their way in. Carjacking, for example. I’m not sure these are guys just going for joyrides. We need to scrutinize. Of course, there are questions too about the Newark Housing Authority.”

“This legislation was developed years ago in order to get better supervision over the Waterfront Commission following (the New York Inspector General) investigation into abuses (of the previous administration) at the Waterfront Commission,” but not introduced until after the regime change occurred, he said. The previous regime was allegedly sitting on its hands regarding investigations. “There has never been any regulatory authority over it. My position now is we need to get a responsible commissioner in there.”

If former Special Agent in Charge Jan Gilhooly proves as good as he looks, “Then I don’t need to move this legislation,” Lesniak said.

Johnson also wants to take a wait and see attitude. Like Lesniak, he applauds Gilhooly of West Orange, Gov. Chris Christie’s pick to be New Jersey’s rep on the Waterfront Commission.

“There was no connection between the money and (the legislation),” Johnson told PolitickerNJ when asked about the $1,000 he received from the ILA. “I felt that the waterfront commission wasn’t enforcing the law as efficiently as they could have. I thought Sen. Lesniak had a good idea in having the state police and Port Authority taking over (their duties).”

R
egarding the donation, “That’s why the system is good,” the assemblyman said. “It’s an open system. People can see where the money is going.”

Lesniak pivots on the docks; Officials: Evenchick not resigning 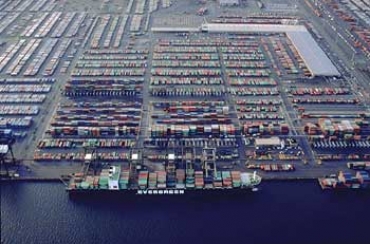