Scratching around the Statehouse for years on a journey that included a general election pounding from Bill Baroni in 2005 and a 2007 convention squeak-out loss to fellow Democrat Wayne DeAngelo, Benson recorded a victory earlier this week to land the vacant 14th Legislative District seat to succeed Linda Grenstein in the Assembly. Benson assumed the oath of office two days later to officially occupy the seat.

The 7th District Republican congressman landed a spot on the powerful Energy and Commerce Committee, which has jurisdiction that includes national energy and environmental policy, health and health facilities, interstate and foreign commerce, consumer affairs and consumer protection, and travel and tourism.

Even with the umbrella drink in a blizzard, the Republican governor stays above 50%. Despite his decision not to tug on Ford-tough work gloves and drop the chains on a salt truck, Christie still recorded a 53% job approval rating from FDU on the same week he delivered his State of the State address.

The governor peppered his speech on Tuesday with shout-outs to key living Democrats, including a gratified-looking Senate President Steve Sweeney (D-West Deptford) and Assemblywoman Sheila Oliver (D-East Orange), Newark North Ward Democratic leader Steve Adubato and Newark Mayor Cory Booker. But he saved his own-party-praise for the deceased, with lump-in-the-throat evocations of former Presidents Abe Lincoln and Ronald Reagan, both Grand Old Party icons. The omission of an ‘attaboy to a live GOP body in the room, coupled with continuous tales of front office beat-downs of legislators, regardless of party, has people ready for Christie to warmly reach back next for the Barry Goldwater reference.

Sources say the longtime Republican State Committee treasurer and quiet torchbearer of the Reform Jersey Now banker’s lamp wasn’t relishing his Monday appearance before the Senate Judicary Committee. But after sustaining a few complaints about RJN, Gravino received a Senate stamp on his nomination to the Highway Authority.

A last-minute amendment to an airport sale bill would send the revenue into South Jersey’s eight counties instead of into the city proper, which was the original intent of the bill.

The Essex County town lost a party leader this week with the death of Councilman P.J. Mac Donald, a beloved local official who lost a long battle with cancer. A close ally of Mayor Ray Kimble’s, Mac Donald weathered one of the decade’s most contentious local races to win his council seat in 2008.

The Star-Ledger hammered 28th District Assemblywoman Cleo Tucker (D-Newark), forcing her to retreat from a bill she authored that would require license plates for bicycles. The much-read story weakened Tucker at a time when Newark pols are jockeying to stay in their seats in time to land the line and get re-elected.

Stone-faced during the governor’s State of the State, the prez of the New Jersey Education Association must again gird for battle with a pugilistic governor who wants to eliminate teacher tenure and frontend-load vouchers and merit pay.

John Cimino
The well-liked Mercer County freeholder was not well-liked enough as he failed in a bid to grab the 14th District Assembly seat. But if the long-contending Benson’s victory is any indication, Cimino will likely be back for a run at higher office. 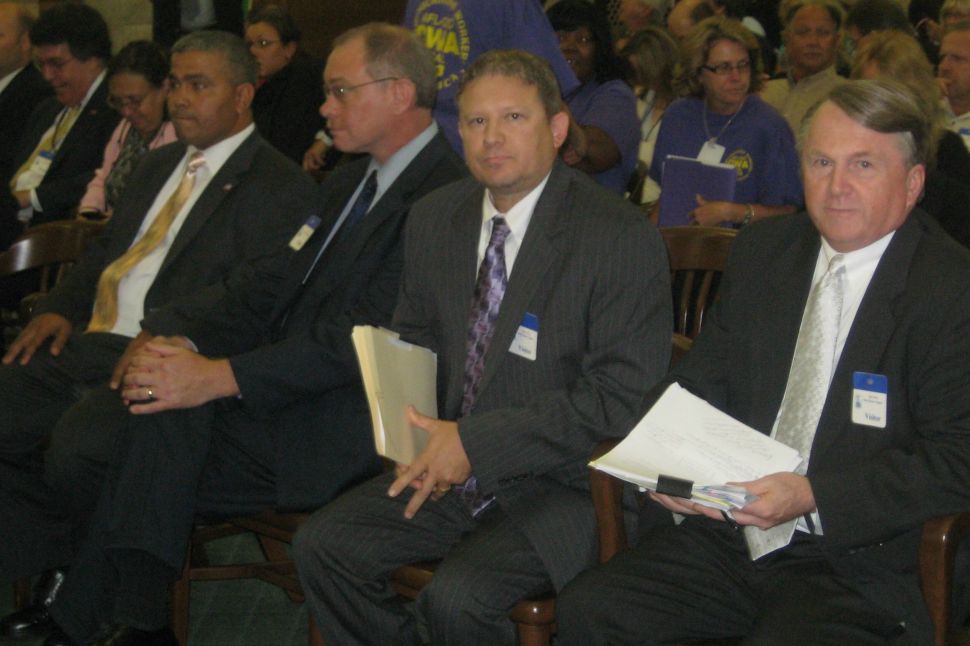