NEWARK – Behind the buzzwords of packing, stacking and bleaching, there are several strategic takeaways from the last two public redistricting hearings in Newark and Jersey City where an urban underground-GOP establishment alliance dominates.

Republicans are working aggressively in tandem with Latinos who have run and mostly lost in Democratic primaries against the party establishment (as is the case with Elizabeth School Board member allies who have attempted and failed to secure municipal seats); or run as grassroots longshots and won (like Perth Amboy Mayor Wilda Diaz).

The GOP and renegade Latino Democrats have forged a relationship to create a vision for at least two beefed-up Hispanic districts that would simultaneously free Republicans to try to win control of the suburbs.

“I have met with everybody who can listen to us,” Perez told PolitickerNJ.com, an independent Democrat and advocate for independent Latino leadership acknowledging that he met earlier this year with state Senate Minority Leader Thomas Kean (R-Westfield) to discuss redistricting and his own designs for three or four Latino majority districts, but pointing out too that he huddled with Dem power attorney Angelo Genova and Bill Castner, Democratic Party redistricting counsel.

“There’s a struggle between the two parties, and we cannot allow the interests of the Latino community to get caught in the middle,” Perez said. “The constitution provides five Democrats and five Republicans. Both parties have the same influence. The problem is some people think the Democratic Party is a plantation. They don’t like the fact that Brian Stack meets with the governor on behalf of Union City or that Wilda Diaz advocates issues on behalf of Perth Amboy. Yes, I met with Kean. I reached out to him. We had a meeting with him and discussed our concerns.”

He’s unapologetic in the name of working the channels – zero Latino representation among Republican electeds – that exist to effect change and increase Latino representation in concert with 2010 census figures that show New Jersey’s Latino population jumping from 13 to 18 percent over the last decade.

One of the GOP/Hispanic best-case-scenario maps would join the cities of Passaic and Paterson – tough, maybe impossible to attain because of Clifton nuzzled between the two – certainly the toughest among these potential scenarios. That explains the constant tweaking of 36th District state Sen. Paul Sarlo (D-Wood-Ridge) whose district includes Passaic, and the defensive arguments made on behalf of preserving Passaic in the 36th made Sunday in Jersey City by Passaic Mayor Alex Blanco.

It also explains why Assemblyman Gary Schaer (D-Passaic) hovered in the wings throughout most of the day. If Schaer’s Passaic gets gobbled up by Paterson, where does the Orthodox Jewish Democratic Party establishment figurehead and fundraising king go?

The two-pronged strategy also might account in part for Gov. Chris Christie’s and his allies efforts to soften up state Sen. John Girgenti (D-Hawthorne), a headline headache victim in the aftermath of this month’s Passaic Valley Sewerage Commission scandal. A fundraising beneficiary of numerous PVSC employees now fired from their jobs, Girgenti’s 35th District includes Paterson.

Some Latinos wouldn’t mind dumping Hawthorne and Wood-Ridge and any other outlying towns that would prevent the fusion of Paterson and Passaic and create the opportunity for – in all likelihood – two or maybe even three Latino legislators.

The Passaic-Paterson redistricting logic also applies to Elizabeth, the centerpiece of District 20, where a steady flow of Latinos who have run and lost local municipal elections make the same intensified arguments for more Latino representation – much to the delight of those Republican members of the redistricting commission.

Fuse heavily Latino Elizabeth together with the Latino portion of Newark, for example, to create a GOP-estimated 55.92% Latino district and state Sen. Ray Lesniak (D-Elizabeth) turns into primary roadkill against state Sen. M. Teresa Ruiz (D-Newark), or so runs the logic of the strategy. Assembly Majority Leader Joe Cryan (D-Union Twp.), a Democratic member of the redistricitng commission, would find himself stranded – just like Girgenti and Sarlo – in that suburban portion of the 20th – and deprived of the security blanket of Elizabeth: registration 22,422 Dems to 2,183 Reps.

“I don’t believe in segregation,” Lesniak told PolitickerNJ.com. “Last time I checked, Annette Quijano was a female whose parents were born in Puerto Rico. Perez may know different.”

The veteran state senator said he favors the districts more or less as they currently stand notwithstanding the changes consistent with population shifts.

“I am because what we did ten years ago was correct,” he said. “What the Republicans want is the political equivalent of segregation.”

Convinced of the deadweight GOP brand in urban New Jersey, Democrats want to discredit the renegade Latinos by hyping their alliance with Republicans.

Remember, Lesniak’s allies in last year’s local municipal elections won all but one seat on the council against the allies of upstart Rafael Fajardo simply by heavily drumming Fajardo’s connection to Gov. Chris Christie. They played the Republican card, and won.

That happened in New Brunswick, too, last year. The grand designer of the anti-Democratic Hispanic establishment throughout these hearings – Perez teamed with his wife, attorney Patricia Bombelyn, to try to get her elected mayor. Bombelyn packaged herself as a grassroots Democrat infused with Obama power Rutgers students up against an entrenched Democratic Party machine. At their debate, longtime Mayor James Cahil asked a single question of his challenger.

Bombelyn was a Christie supporter over incumbent Democrat Jon Corzine. Cahil used that piece of information to successfuly craft his entire primary re-election campaign, running on a “Real Democrats” slogan against a team he denounced as pro-Christie pretenders.

Blowing apart the GOP pariah argument, state Sen. Brian P. Stack (D-Union City) last week stunned his own party when he declared Christie “the best governor ever” as he seeks advantage through the redistricting process alongside fellow power player Sacco.

On one Republican map, Stack’s District 33 would gain more Jersey City but lose Cuban stronghold West New York and Gutenberg and, according to the GOP, maintain a 50.9% Hispanic district. Stack doesn’t want to lose West New York, and hovered throughout most of Sunday’s hearings. Movement in 33 would create movement in 32, as Sacco’s current district would lose its portion of Jersey City and instead pick up West New York and Edgewater in Bergen, under the same scenario.

According to GOP figures, this new district would create a 51.54% Hispanic district. 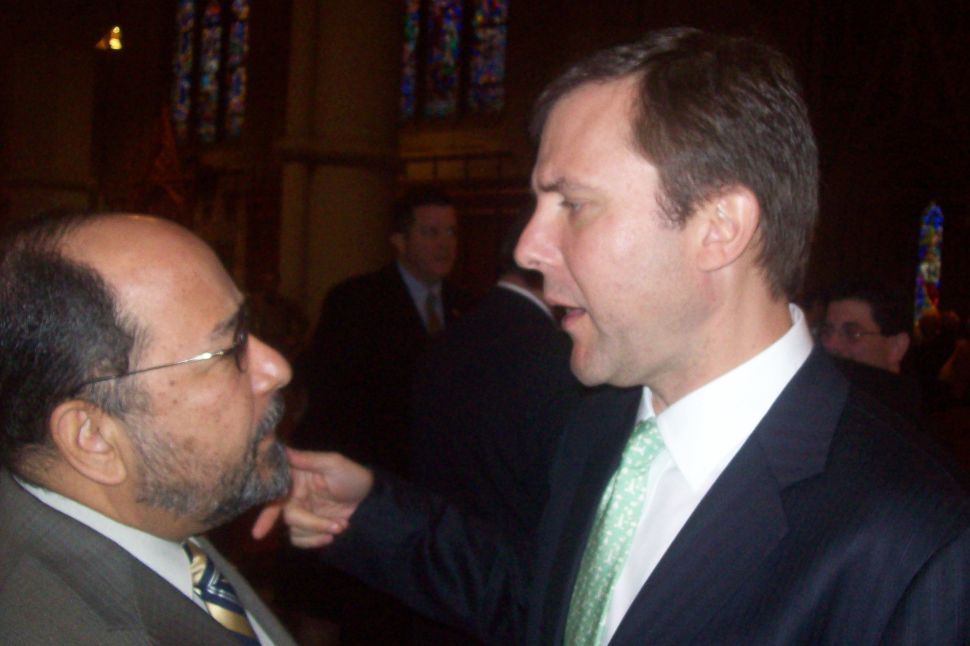