TRENTON – When the Senate Judiciary Committee disbanded its meeting on Jan. 25, a smattering of committee and commission nominees stood from their seats after hours of waiting to go before the upper chamber panel for a vote, and left Trenton with nothing to add to their resumes.

Why? The committee called it a day and ran off to a full chamber session, a strategic move by the Democrats, the same reason, critics claimed, that that meeting started more than an hour late: to avoid putting controversial board nominees up for a vote.

If the Dems really didn’t want a vote, they could have just withheld those names from the agenda that day, but that was another strategic move.

The machinations of getting nominations approved – especially with a split-party Statehouse – are messy, and sometimes hard to follow. Tabs are kept by several dozen stakeholders.

Right now, the most notable political injunction in the appointment process is the Democratic blocking of the Republican nominee for Supreme Court, Anne Patterson; but Patterson is an issue unto herself.

The man who started the current maze of horse-trading and hand-wringing is Ronald Gravino, campaign treasurer for Gov. Chris Christie and bookkeeper for Christie-backers’ issue-based shadow PAC, Reform Jersey Now. Gravino is the newest addition to the N.J. Turnpike Authority board, but his Jan. 10 approval cost the GOP leaders.

Gravino’s Judiciary Committee approval – which required the committee to reconvene and take a vote on Gravino after putting a hold on him earlier in the day – came after Democrats negotiated a package of judicial nominations, such as Frederick Shuck, a personal friend of South Jersey powerbroker George Norcross, to be put forth by the governor.

But after Gravino was approved, Democratic sources said Christie still would not release the nominations of the judges leading in to the Jan. 25 committee meeting.

Sources said Christie was bartering with the judges again, this time in return for a hearing on other appointments, particularly those awaiting confirmation to the Highlands Water Protection and Planning Council.

Committee Chairman Nick Scutari (D-22), of Linden, is and was feuding with Christie over issues other than the appointments, namely the medical marijuana law and the firing of Scutari ally Chris Hudak from the Motor Vehicles Commission.

“Not since he hasn’t gotten everything he wanted – not since the medical marijuana bill – has (the governor) sat with me (to discuss nominations),” Scutari told PolitickerNJ last month. “(N)ow he works through staff.”

Scutari was further annoyed when state Sen. President Steve Sweeney (D-3), of West Deptford, engineered the deal to post the Highlands nominees at the Jan. 25 meeting, according to sources, in order to get Shuck, a Camden County judge, nominated by the governor.

So the Democrats posted Christie’s appointees on their agenda, and the governor subsequently finalized the Democrats’ judicial nominations the morning of Jan. 25.

Schuck and Heidi Currier of Middlesex, another judge appointment being held up, were approved as the first order of business.

Another appointment heard that day – not part of any package – was former Attorney General David Samson, who is headed to the Port Authority of NY/NJ board as its presumptive chairman.

Samson was unanimously approved, the judges received their nods, but the other nominees went home when the committee adjourned.

Just as Christie drew ire from Dems for re-trading the judges – once for Gravino and again for the Highlands nominations – the GOP was angry that the Democrats reneged on a promise to give several appointments an up-or-down vote, Republican sources said.

On Jan. 25, the committee took off without hearing the nominations of Richard Vohden and Samuel Race to the Highlands Council; George Kolber to the N.J. Sports and Exposition Authority; and Chip Stapleton to the N.J. Maritime Pilot and Docking Pilot Commission.

“These are people nominated for months, nearly a year,” argued state Sen. Joe Kyrillos (R-13), of Middletown, as the meeting was adjourning. “We’re going to make them wait again?”

Kolber, like roughly 140 other Christie nominees from 2010, were never approved by the Senate last year. Their nominations expired in January and had to be renewed by the Governor’s Office, much to Christie’s chagrin. (The mere minutiae en masse of procedurally re-nominating the whole lot of appointments has itself been cause for consternation among the governor’s staff, a Statehouse source said.)

Some of the 2010 nominations have not yet been renominated for 2011, like two others up for the Highlands Council and two other Sports and Exposition Authority board members, former U.S. Rep. Mike Ferguson and Bergen County GOP chairman Bob Yudin.

The Governor’s Office had 60 names renominated and ready for consideration heading into the Jan. 10 meeting, before Gravino’s approval. Because of the ongoing standoff, the GOP was planning a protest at the War Memorial with all of their unconfirmed nominees for that Friday, Jan. 14. It never happened, and may only have been floated for leverage, according to a source.

The front office backed off the protest idea when they believed a breakthrough had been made, according to a source close to the nomination proceedings; Scutari posted 33 nominees for the Gravino meeting.

Even though not all of the nominees were heard that day – or on Jan. 25 – the momentum for a protest or major campaign to get the nominees appointed died, sources said. It may be reigniting.

The overall problems with appointments aside, some of the Democratic objections to the candidates may be merited.

For instance, the Highlands board appointees aren’t just being held back for political reason.

State Sen. Bob Smith (D-17), of Piscataway, said the two men who Christie has put forth to swear allegiance in protection of the Highlands Act are on the record vehemently opposed to the law. Smith sits on the Judiciary Committee.

“This is the water supply for 5 million New Jersey citizens,” Smith said. “Based in their track record…they’d be looking to destroy the (law) from the inside.”

“If they are put on an agenda I will have extensive questions for them,” he said. “It’s absurd.”

Christie’s office did not respond to requests for comment on the ongoing appointment problems, but they defended their appointees last year by claiming that farmers believe the water supply protection law has devalued their land.

“(The nominees are) not in any way meant to undercut the mission of the Highlands Council,” Christie spokesman Kevin Roberts told the Star-Ledger. “But the governor has indicated he believes reforms are needed.”

Even the governor’s main enviro-backer, David Pringle of the Environmental Federation, is against the nominations, not to mention Christie critic Jeff Tittel of the Sierra Club.

“The Governor has appointed pro-development individuals who have spoken out against the Highlands regulations to serve on the region’s Water Protection and Planning Council,” the Sierra Club said in a recent statement. “The DEP rules restricting development in the Highlands will be up for re-adoption next year and Christie is expected to dismantle those protections in favor of promoting sprawl.”

Another appointee in the spotlight is GOP lobbyist Stapleton, former chief of staff to Gov. Donald DiFrancesco, who is awaiting approval to join the Maritime Pilot and Docking Pilot Commission for a three-year term with a $28,000 annual salary.

Stapleton was formerly an employee at the University of Medicine and Dentistry in New Jersey (UMDNJ) and was part of the Star-Ledger’s investigation at UMDNJ in 2005.

According to the paper, Stapleton was paid $1 million in salary for over a decade, although officials could not provide any memos, letters or reports that he generated.

State Sen. Loretta Weinberg (D-37), of Teaneck, another committee member, said, “He earned over $1 million and could not point to one work product. Don’t we have people in jails (for) doing the same, like (former) Sen. (Wayne) Bryant.”

Another high-profile nomination that is of interest is Nelson Ferriera to the N.J. Transportation Trust Fund Authority.

Ferriera is owner of Ferriera Construction, a large highway and bridge construction company that was revealed to be a top-level donor ($25,000) to Reform Jersey Now, the 501(c)4 issue-advocacy group tied to several of Christie’s closest allies.

Like Gravino, Ferriera will be subject to a heavy dose of hard-line questioning when and if he appears before the committee.

The newest roadblock to progress is the senatorial block being put on David Steiner, a reappointment to the Port Authority whose term expired under Gov. Jon Corzine.

The problem then and now is state Sen. Kevin O’Toole (R-40), of Cedar Grove, who was under Corzine and is under Christie blocking the appointment of Steiner, who like O’Toole comes from Essex County.

Steiner may be qualified, one Republican said, but the fact that he dropped over $650,000 on New Jersey Democrats since 1999 does not go unnoticed.

O’Toole said he’s in the midst of vetting Steiner for the post, and will make a move as soon as he’s ready.

Last week the Judiciary Committee cancelled its meeting, and for its Thursday meeting this week only one name appears on the agenda. The committee will likely approve Jan Gilhooly to the Waterfront Commission of New York Harbor without any debate. Gilhooly was nominated by Christie in November and has backing from prominent Democratic Sen. Ray Lesniak (D-20), of Elizabeth.

Lesniak said he made sure Gilhooly’s name was on the list – months after he was nominated – because New Jersey hasn’t had a functioning, legislatively approved commissioner at the agency in years.

Now a year into Christie’s tenure, Scutari said the process to move nominations is ongoing. But, he said some of the nominees themselves are part of the problem, like Stapleton and Ferriera. He said the block on Steiner is not an impediment.

“I’ve certainly got questions for both of them,” he said, but “Steiner is an entity to himself.”

The new trickling through of approvals might seem like breakneck speed to the GOP, who saw Christie’s first year go by without representation on several key boards, in courthouses, and elsewhere.

It created a backlog in the courts, Kyrillos said, and on the boards it has severely complicated the process of governing. “That’s why (the governor has) vetoed so many minutes of these things.”

“I’ve been there when there was a Republican governor and a Democratic Senate President,” Kyrillos said about the near-halted nomination proceeding. “I’ve never seen it like this.”

“We’re coming in on Thursday for one name,” he said, and although he fully approves of Gilhooly, the fact that he was told there wouldn’t be any need for questioning of the nominee this week was disconcerting.

“It shows the seeming arbitrariness of the committee and its actions. There’s no standards,” he said, nothing “fixed and predictable” for nominees and committee members to expect when vetting these public servants.

Furthermore, Kyrillos asked what of shelved appointments to the Rutgers University Board of Trustees, the New Jersey Transit Board of Directors, and the Fort Monmouth Economic Revitalization Authority?

“This is the bread and butter of government. I’m not taking about the Sports Authority, the Port Authority, all the sexy boards out there,” Kyrillos said. “Since we’re there (on Thursday), why are we not hearing the nominations?” 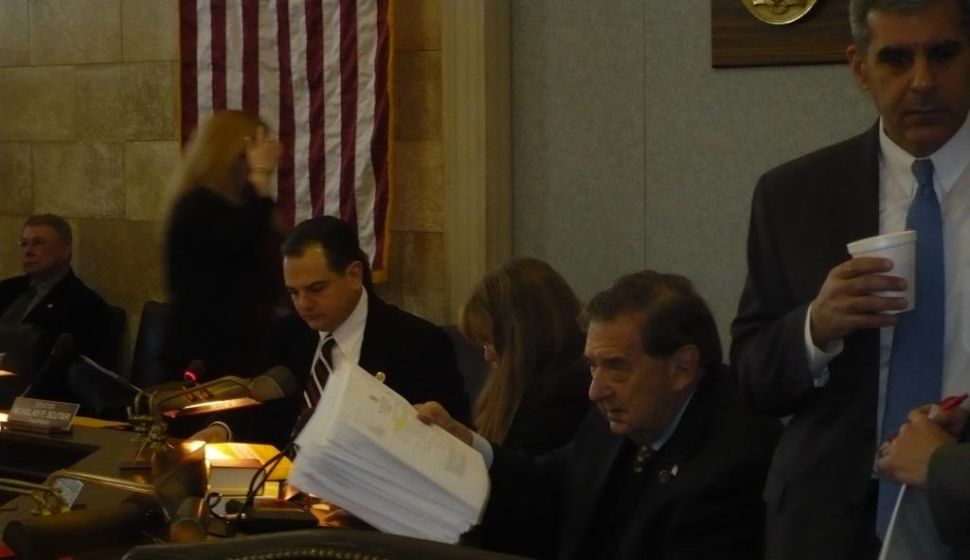