Assemblyman Patrick Diegnan, (D- 18), of South Plainfield, said Gov. Chris Christie’s plan for school construction reform reminded him of a similar plan posed by another governor with a similar-sounding name.

Diegnan called the school construction plan “Whitman 2,” saying it reminded him of a similar plan posed by former  Gov. Christie Todd Whitman, which like Gov. Christie’s plan, he found ineffective, he said.

“It’s an inadequate response to a severe problem facing the schools in New Jersey,” he said in a phone interview Tuesday afternoon.

The plan unveiled by the governor would allocate funds for the construction of, or improvements to, schools in Newark, Jersey City, Paterson, Elizabeth, Bridgeton, and West New York, among others.

Diegnan said he was personally shocked that Phillipsburg, which like the others, is an Abbott District, wasn’t included in the list.

“The kids have been learning out of trailers since at least 2002,” he said. “It’s a really sad case and it’s not a satisfactory response in my opinion.”

He also questioned why there would a new list of schools every year. 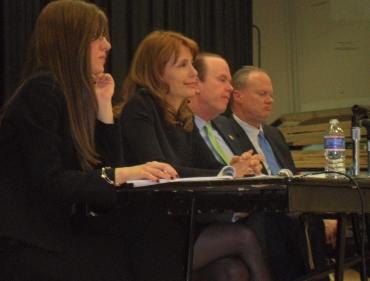